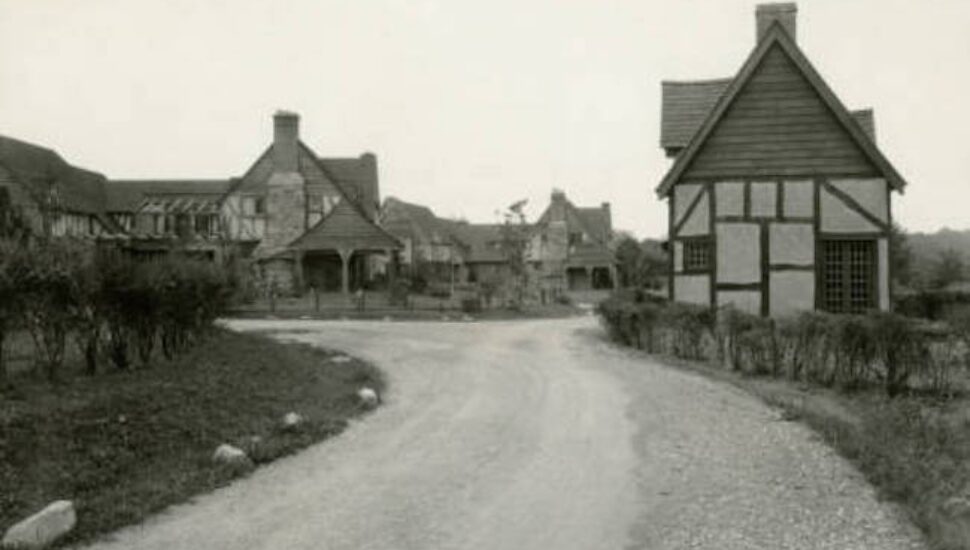 A quaint pocket in Wynnewood dotted with Tudor homes and Juliet balconies was once a refuge for writers and artists who sought a quiet environment. The English Village was founded in 1928 by brothers Donald and S. Arthur Love, who modeled the neighborhood with Stratford-upon-Avon in mind, writes Stacia Friedman for Hidden City Philadelphia.

S. Arthur Love, the architect had the chance to see the English countryside when he visited in World War I. His vision sprang into reality and, over 80 years later, it was designated as the English Village Historic District.

The 29 mansions are all one-of-a-kind.

Some feature the tile work of Doylestown archeologist-artist Henry Mercer tiles. Others feature stonework from local quarries and lumber from repurposes railroad ties.

Artists of various genres lived in the English Village, establishing studios within their homes. These creative types included Sue May (a portraitist), her husband Paul Gill (a watercolorist), and sculptor Agnes Yarnell, who is said to have welcomed First Lady Eleanor Roosevelt as a guest.

The English Village streets are, by design, far from perpendicular. One, Arthur’s Round Table, is an oval. And in what may have been a drop of irony, a serpentine pathway was dubbed Lover’s Lane.

Examples of this Tudor Revival style architecture — an aesthetic counter-movement away from Victorian Gothic and its heavy stonework and pointed arches — exist elsewhere in and around Montgomery County, especially in Elkins Park and Chestnut Hill.

Read more about this historic neighborhood at Hidden City Philadelphia.

Bed Bath & Beyond Pulls the Plug on Wynnewood Store; Other Montco Locations Remain Afloat — For Now