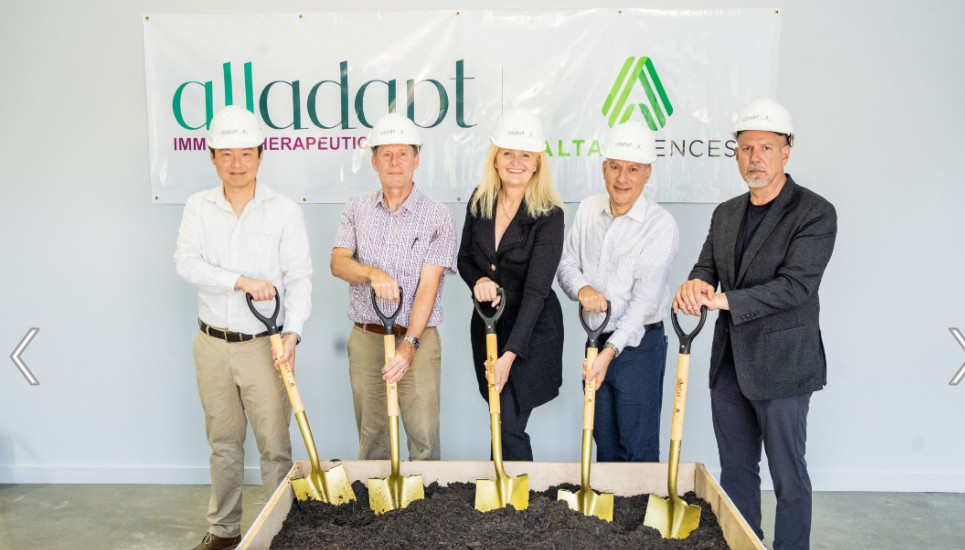 Image via Alladept at LinkedIn.
The Hatfield "groundbreaking" of Alladept, perhaps brought inside owing to weather conditions.

Alladapt of Menlo Park, Calif., is investing $30 million to expand its operations to a manufacturing plant in Hatfield. The biopharmaceutical company specializes in developing food-allergy treatments. Its Montgomery County presence is expected to be a small jobs creator (up to 10 positions), but those career moves will clearly benefit the professionals who fill them. John George’s coverage of the expansion in the Philadelphia Business Journal was nothing to sneeze at.

Alladapt’s 53,000-sq.-ft. manufacturing plant and warehouse is set to begin operations in 2023.

But why is this West-Coast company heading east?

CEO Ashley Dombrowski says it’s to continue the firm’s relationship with Alta Sciences of Harleysville, which also operates within the Hatfield facility.

“As production comes online, this will require a significant expansion of our relationship with them,” Dombrowski said.

The company is currently testing an oral immunotherapy drug that targets proteins to trigger allergic reactions. It solidified a $50 million non-dilutive loan from Hercules Capital, Inc., (Palo Alto, Calif.) to support the clinical development of the drug at the warehouse. The company also raised $119 million in June through equity financing led by Enavate Sciences (also Menlo Park, Calif.) that will keep it financed through 2024.

“The facility has the ability to be further scaled over time to increase capacity as needed,” Dombrowski said.

Read more about this West Coast biopharm firm’s plans to expand to Montgomery County in the Philadelphia Business Journal.