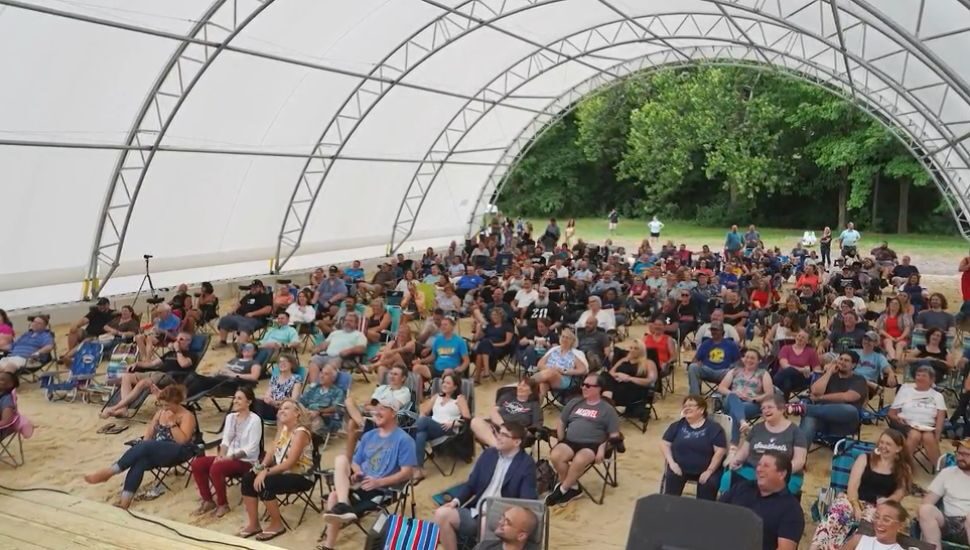 Soul Joel Productions, a Royersford-based independent comedy production company, got on its feet in 2019, the brainstorm of Joel Richardson. When the pandemic shuttered his indoor venues, Richardson took his array of comics outdoors, using a domed roof to protect audiences from the elements and fresh air to keep them safe. Travis Brower, of PHL17, uncovered the story of Richardson’s covered Pottstown performance spot.

Richardson took the leap into the entertainment field in 2019, when he quit his day job, cashed out his 401k, and started producing comedy shows. His reach eventually spread to 21 states, with sets covered by comedians regularly seen on Comedy Central, Last Comic Standing, and MTV.

He is particularly intent on providing humorous content in his own backyard.

“Here in Montgomery County there’s not a lot of entertainment, and we’re filling that void,” he said.

His Pottstown installation is onsite at SunnyBrook Ballroom. Like the other outdoor sites, it has been given a casual, fun vibe, using a boardwalk-style stage that faces a beachy seating area. Audience members bring their own chairs.

A full onsite bar is available before and during each performance. But many of the comedians are appropriate for children.

The full content of this story is at PHL17.

‘Picked by the One Team I Was Rooting for My Entire Life,’ Pottstown Native Now a Member of Phillies Organization