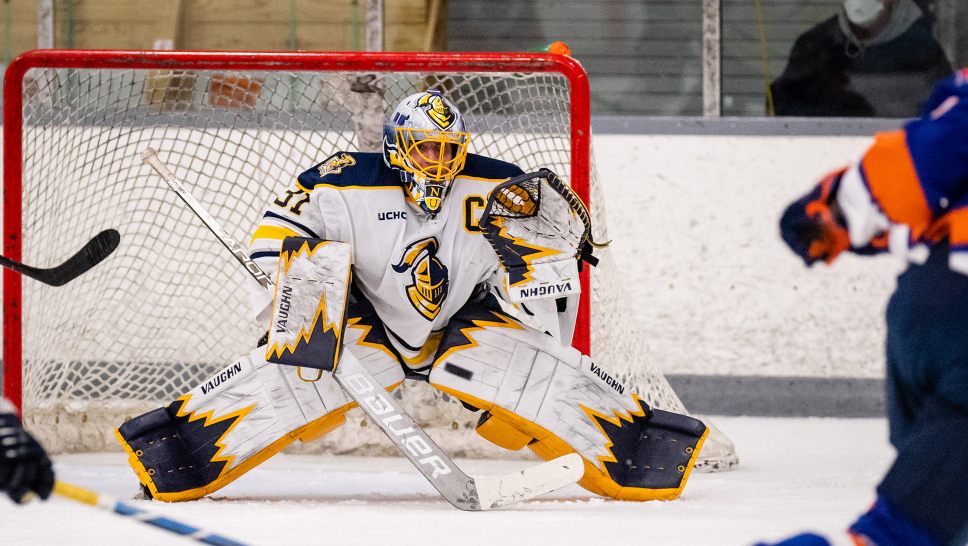 Jake Loburak, a native of Lansdale and recent graduate of Neumann University, has received a nomination for an Emmy Award, based on his work as executive producer and videographer for a student-produced documentary series titled Between the Blue Lines.

The five-part documentary tracks the Neumann University men’s ice hockey team through the course of its 2021-2022 season, exploring the life of college athletes and the emotions the young men faced as they returned to the ice after COVID severely restricted access to the sport they love for two years.

The National Academy of Television Arts & Sciences announced the nominations for the 40th annual Mid-Atlantic Regional Emmy Awards on August 9, 2022. The fifth and concluding episode of Between the Blue Lines was nominated for a Student Production Award in the Long Form category. Other colleges nominated in the same category include Temple University and Penn State University.

Jake Loburak, Neumann’s 2022 valedictorian, orchestrated production of the documentary, using it as his senior seminar project. It begins by showing how the ice hockey players dealt with the COVID shutdown and then follows the athletes as they return to the ice and bond as a team.

The series took eight months to film and involved a production team of six students.

“I had wanted to do a documentary since I was a freshman. I knew it was a daunting task, but we put together a phenomenal crew,” Loburak said.

Sean McDonald, director of Neumann Media, agrees. “I’m so incredibly proud of these students. Being able to tell a compelling story will always make you stand out, no matter your background. These students proved it and are now being recognized for their work.”

The Emmy Award ceremony is scheduled for October 1, 2022, at Loews Hotel in Philadelphia.

You can watch the nominated episode here.