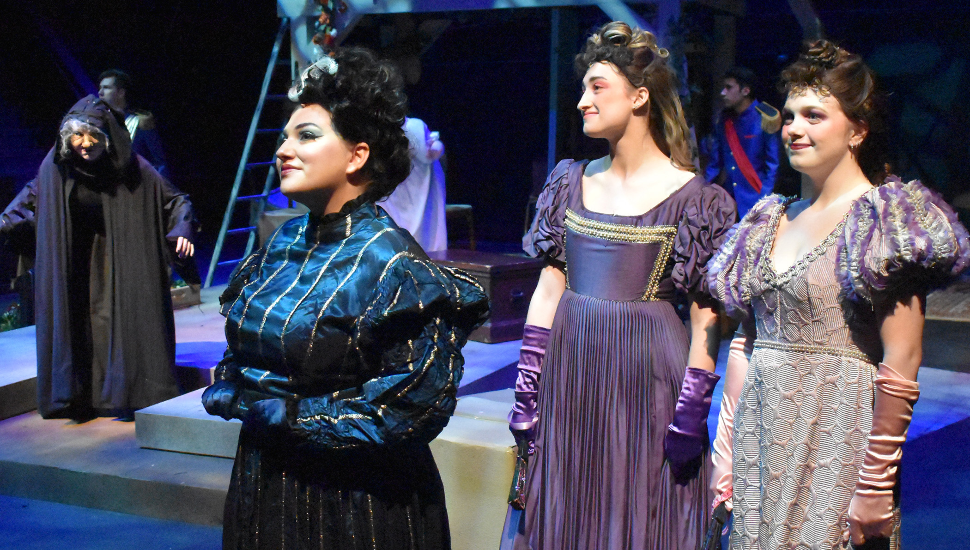 West Chester University’s Department of Theatre & Dance presents Into the Woods from April 20-24 with music and lyrics by Stephen Sondheim and book by James Lapine.

Directed by Associate Professor of Theatre Charlie DelMarcelle, Into the Woods runs from Wednesday to Friday at 7:30 PM. It will run Saturday and Sunday at 2 PM in the MainStage Theatre in the E.O. Bull Center for the Arts.

The show, involving 20 cast members and as many student technicians, is the first large-cast musical the Department of Theatre has staged since before the pandemic. It is also the first of what may be many tributes to the late Sondheim, who died in November.

Inspired by the Grimm Brothers’ most popular folktales, Into the Woods imagines what would happen if famous fairytale characters and stories intertwined. Cinderella, Jack (of bean-stalk fame), Little Red Riding Hood, and a Baker and his Wife set out into the forest on their quests to find “happily ever after.”

This beloved musical parable about the loss of innocence, the joys and sorrows of adulthood, and the price paid for getting the things you really want is sure to challenge and delight audiences of all ages.

“It’s great to be back on stage doing a large-cast musical again, something that has not been available for our performance students since before the pandemic,” said DelMarcelle. “Stephen Sondheim’s Into the Woods is one of the hardest scores in the modern musical theatre canon. This cast, who is so excited to be singing together again, has really come together beautifully and has risen to the occasion.

“Thematically, Into the Woods deals with grief and loss and what comes after happily ever after. Coming out of the pandemic, I think our students are grappling with these huge ideas in a very mature way. I also think the show might resonate with audiences in a slightly altered way.”

The cast for Into the Woods includes:

23+ Lovely Things to Do This Weekend in Montco