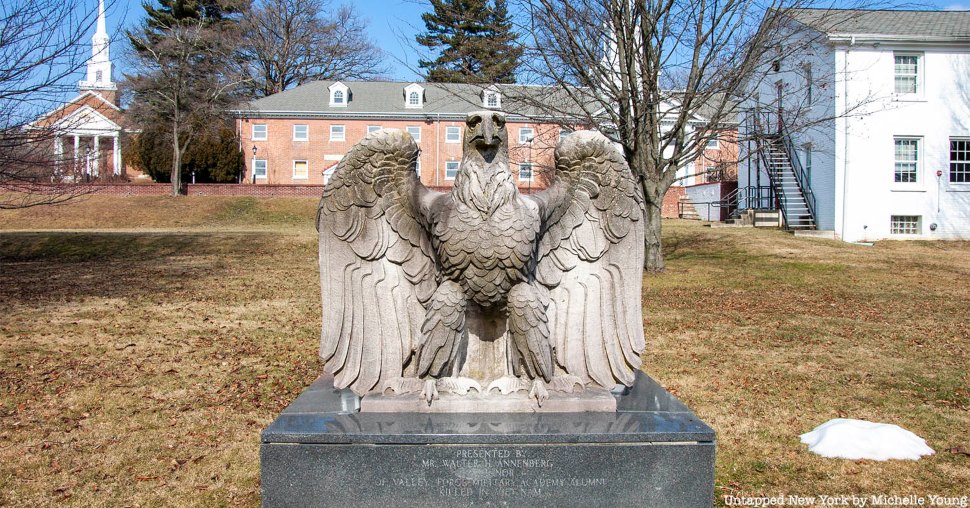 The eagle statues that once adorned the original Pennsylvania Station in New York City found new homes thanks to a preservation effort back in the 1960s.  One of those eagles ended up at the Valley Forge Military Academy and College in Wayne, writes Michelle Young for Untapped New York.

When Penn Station was being demolished between 1963 and 1968, people nationwide volunteered to adopt the eagles.

Of the 22 eagles that stood on the façade of Penn Station, 18 still exist today because of those preservation efforts.

The one that ended up at Valley Forge sits on a marble block engraved with the year 1965 and a memorial: “Presented by Mr. Walter H. Annenberg in honor of Valley Forge Military Academy Alumni Killed in Vietnam.”

Annenberg was the media giant behind many well-known publications, including TV Guide, The Saturday Evening Post, The Atlantic Monthly, Seventeen magazine, and The Philadelphia Inquirer.

He was the United States Ambassador to the United Kingdom from 1969 to 1974 and also happened to sit on the board of Penn Central Railroad.

Prior to the demolition of Pennsylvania Station, Annenberg suggested to Penn Central Railroad President Alfred E. Perlman that he “would be pleased to have one of the eagles.”

Annenberg offered to cover the cost of moving the eagle to his Inwood estate in Wynnewood. It sat there for at least two years, until about 1965 when it was moved to Valley Forge Military Academy, about 20 minutes away.

The transfer happened following a visit to Inwood by Gen. Milton G. Baker, founder and a superintendent at Valley Forge.

According to a 1971 letter Annenberg wrote to Joan Amundsen of Hicksville, Long Island, he and the general were discussing the war dead and Gen. Baker talked about the “lads from Valley Forge Military Academy who had given their lives, and I suggested that the eagle might make a fitting memorial to the boys of the Academy, and General Baker very much liked the idea.”

Annenberg had the eagle moved to the Valley Forge campus and placed it on a dignified marble base with a series of shrubs at the side and back.

Read more at untappedcities.com about this unique eagle and its history at Valley Forge Military Academy.