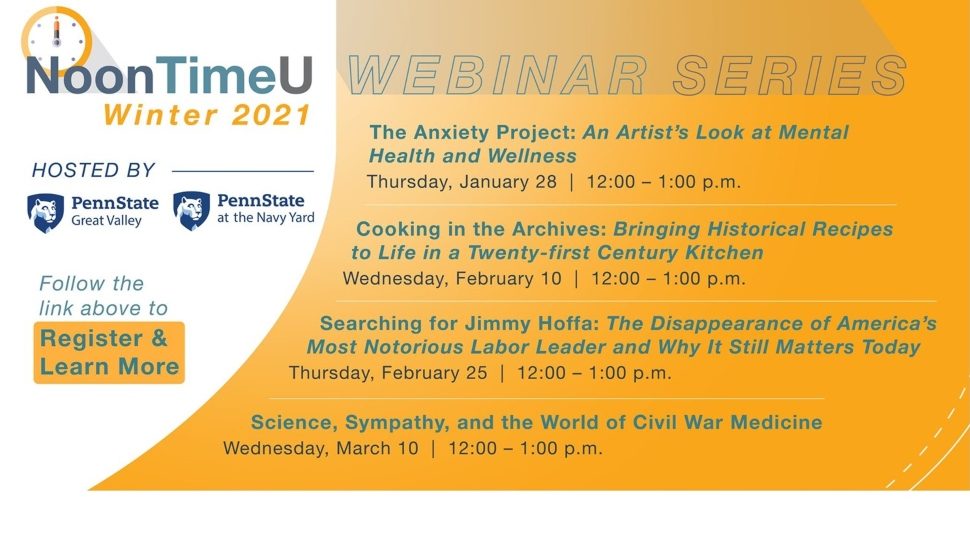 Taking breaks is important. Step away from your daily routine, spend your lunch break with Penn State Great Valley’s free lunchtime learning events, and learn something new from experts. The NoonTimeU webinar series covers an array of topics to help with your personal and professional development.

The Anxiety Project includes over 400 drawings, four graphic medicine publications in the Annals of Internal Medicine, and a live performance, all of which explore what it’s like to live with anxiety and depression. Using a combination of personal experience and research into the complex world of mental health, Penn State Professor of Theatre William J. Doan focuses on the intersections of art, science, and health.

Doan, who is also the artist-in-residence for the College of Nursing, has co-authored three books and written several plays and multiple scholarly articles. He is a past president of the Association for Theatre in Higher Education, a fellow in the College of Fellows of The American Theatre, and was the Penn State Laureate for the 2019-2020 academic year.

Cooking in the Archives: Bringing Historical Recipes to Life in a 21st-Century Kitchen
Wednesday, Feb. 10 | 12-1 PM

Manuscript recipe books are full of intriguing, strange, and familiar concoctions: recipes for syllabubs, turnip cordial water, jumballs, and carrot pudding. Penn State Abington Assistant Professor Marissa Nicosia’s The Cooking in the Archives project sets out to find, investigate, update, cook, and write about recipes from manuscript recipe books produced between 1600 and 1800. Nicosia shares recipes and explains how she finds, researches, updates, and cooks from these recipe books.

Nicosia is an assistant professor of renaissance literature at Penn State Abington. She runs the historical food website Cooking in the Archives: Updating Early Modern Recipes (1600-1800) in a Modern Kitchen. The site currently provides access to more than eighty transcribed, researched, and tested recipes, and has been featured in The Washington Post, Atlas Obscura, Edible Philly, and more.

Searching for Jimmy Hoffa: The Disappearance of America’s Most Notorious Labor Leader and Why It Still Matters Today
Thursday, Feb. 25 | 12-1 PM

David Witwer, Penn State Laureate for the 2020-21 academic year, explores the history of Jimmy Hoffa, a powerful labor leader with ties to organized crime whose disappearance in 1975 made him the most prominent victim of a mob hit in American history. Witwer discusses Hoffa’s disappearance, including why it mattered at the time and why it continues to matter, the case’s connection to the federal government’s war on organized crime, and the shifting fortunes of the American workers who had once been among Hoffa’s most avid supporters.

Witwer is a professor of American studies at Penn State Harrisburg. He previously worked for the New York County District Attorney’s Office and was an investigative analyst on assignment with the New York State Organized Crime Task Force looking into the mob’s role in the construction industry. He has written three books on labor racketeering: Corruption and Reform in the Teamsters Union (2003); Shadow of the Racketeer: Scandal in Organized Labor (2009); and Murder in the Garment District: The Grip of Organized Crime and the Decline of Labor in the United States (2020).

Sharon Ann Holt, associate teaching professor of history at Penn State Abington, discusses how the carnage of the Civil War set off extraordinary innovation in battlefield medicine, pioneering the modern medical idea that illness should be addressed with science rather than moral reform. In the aftermath, as medical innovations continued, social norms about masculinity had to adapt to the existence of 400,000 wounded veterans. This tension helped to alter the 19th century gender system in ways that set the stage for the 20th century.

A native of the Great Lakes region, Holt earned a Ph.D. in American history in 1991 from the University of Pennsylvania. She has divided her career between academic teaching and public history, serving museums and historical organizations in Pennsylvania, New York, New Jersey, and Maryland. She is the author of Making Freedom Pay: North Carolina freedpeople working for themselves, 1865-1900 and recently received an Emmy award for her work as a historical commentator on Philadelphia: The Great Experiment.