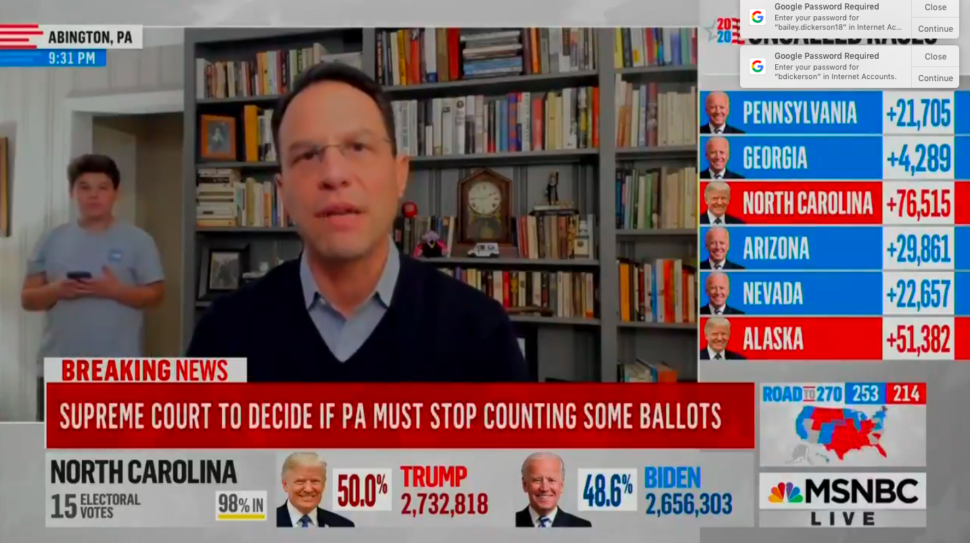 The moment when PA Attorney General Josh Shapiro’s son Jonah wanders into the room while his father was being interviewed in their Abington home has gone viral. Image via MSNBC.

The moment when Pennsylvania Attorney General Josh Shapiro’s teenage son Jonah wandered into the room while his father was being interviewed in their Abington home has quickly gone viral, writes Andrew Court for the Daily Mail.

The completely unexpected moment of comedic relief that happened at the start of the month on MSNBC proved to be just the right thing needed to lift up people’s moods and take their thoughts briefly away from the stress of a tense election count.

The video of the incident shows Shapiro speaking via Zoom, completely unaware that his son had walked into the frame behind him while texting on his phone. When the younger Shapiro finally realizes that his father was in the middle of an important video call, he quietly backs out of the room – but not without revealing the slight embarrassed but cheeky grin across his face.

Shapiro later shared the viral video on his Twitter account, joking that he was taking his son’s phone away for a day.

Read more about the humorous incident at the Daily Mail by clicking here.

Government & PoliticsCheck Out How Your Municipality Voted in the Presidential ElectionNovember 12, 2020

CareersFor the Sake of Your Career and Professional Relationships, Keep Your LinkedIn Profile Politics-FreeOctober 8, 2020