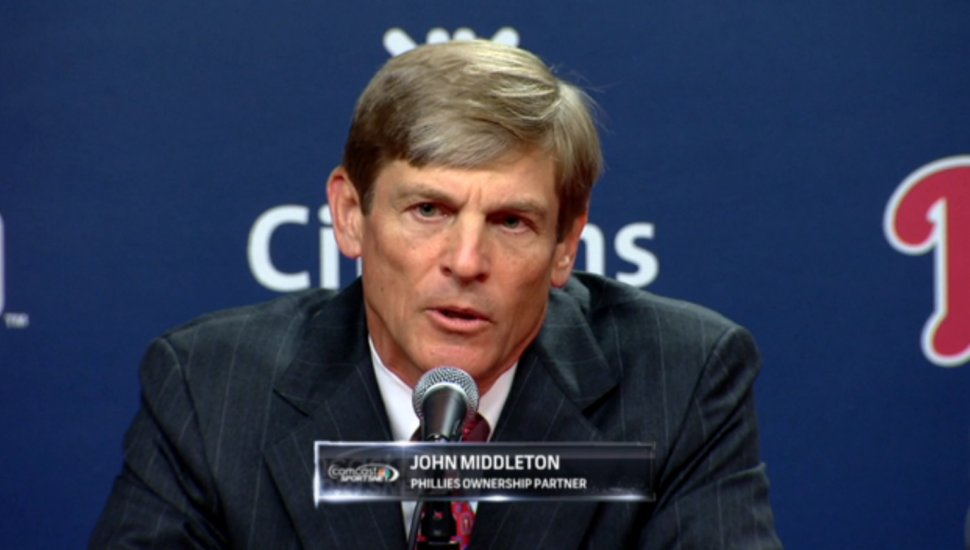 Bryn Mawr resident John Middleton, a 50-percent owner of the Philadelphia Phillies, is one of three Montgomery County residents listed among the top 400 wealthiest Americans, according to the recently published The Forbes 400 list. Michael Rubin of Bryn Mawr and Eagles' owner Jeffrey Lurie of Wynnewood are the other two.

Three Montgomery County residents have made The Forbes 400 list of the wealthiest Americans in 2020, writes Max Bennett for the Patch.

This year, the combined net worth of the Forbes 400 increased by $240 million and now stands at an astonishing $3.2 trillion.

Highest on the list is Michael Rubin of Bryn Mawr at No. 228 with a net worth of $3.5 million. Rubin, 48, has climbed more than 60 spots compared to last year when he placed at No. 296. He is the majority owner and CEO of Kynetic.

Middleton, 65, made his fortune by selling his family’s tobacco business to Altria for $2.9 billion thirteen years ago. He also owns close to a 50 percent stake in Philadelphia Phillies.

Finally, Jeffrey Lurie of Wynnewood comes in at No. 319 – the same as last year – with a net worth of $2.9 billion. Lurie, 69, is a former professor of social policy and the owner of Philadelphia Eagles.

Read more about the richest Montgomery County residents at the Patch by clicking here.

HealthcareSeptember 15th COVID-19 Update: Over 450 New Cases Reported in Montco; 94% of Cases are Among Unvaccinated PennsylvaniansSeptember 16, 2021