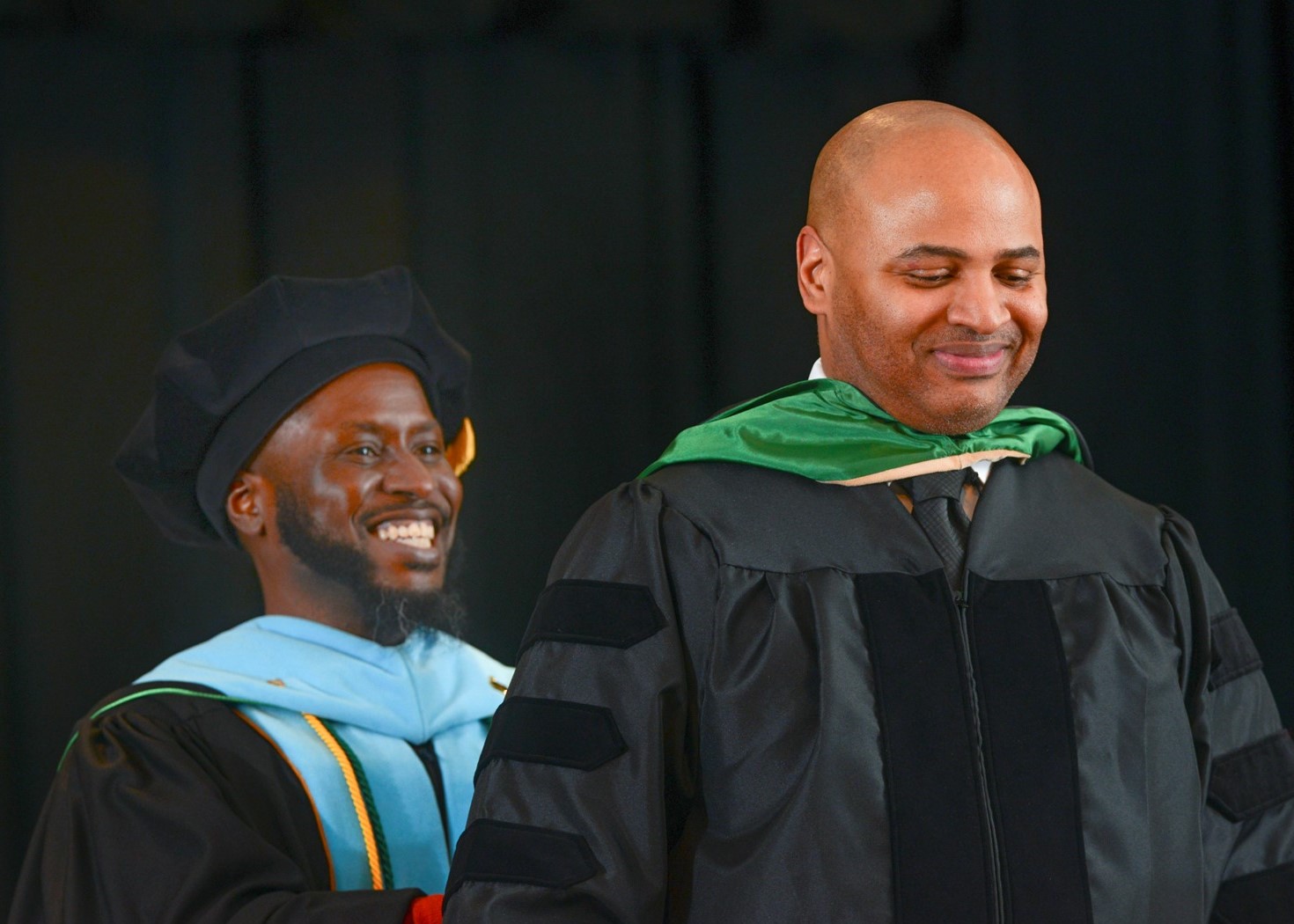 In 1988, Richard Johnson received both his bachelor’s degree from Norfolk State University and his second lieutenant’s gold bar from the Army.

By that time he had already served eight years of active duty as a helicopter weapons repairman. When he transitioned from enlisted man to officer that year, Johnson said, “I was pretty much the oldest lieutenant in the world, and my tolerance for a lot of nonsense was low.”

This no-nonsense attitude apparently served him well. Working in military intelligence, he climbed through the ranks and exited the Army in 2012 as a major, after a 23-year career.

It’s an attitude he has carried over to his civilian endeavors, especially his side business, Hit the Deck Entertainment, was incorporated 12 years ago in Johnson’s hometown of Orange, Va. Hit the Deck is an event and party planning company, with most of its jobs in Virginia, Maryland, and Washington, D.C. The company provides audio and video support, photography and catering services, and also conducts various philanthropic events throughout the year.

Through his business, Johnson said, “I had been working with some guys who were ex-convicts, and we had conversations about how they were having struggles with getting jobs and getting a foot in the door with their criminal records.”

Their records didn’t faze him. Johnson employs about eight people, most of them technicians and sound engineers, and his hiring philosophy can be distilled into two factors: are they hard-working and are they trustworthy?

“I hire people from the neighborhood, people I can trust,” he said, “and I would say that about 80 percent of them have drug convictions.”

No matter. “These are some of the hardest-working and trustworthy people I know,” he said.

This success with hiring ex-convicts while other employers shunned them would provide the spark for his thesis when he enrolled in Wilmington University’s Doctor of Business Administration program in 2015.

Near the end of his Army career, Johnson had earned a master’s degree online from International American University. But as he settled into civilian life – he holds a full-time position in Washington, D.C., as a management analyst in the Department of State, Consular Affairs, Passport Services – he found that his thirst for knowledge had not been slaked. That’s when he began a search for accredited online programs and discovered WilmU.

“Wilmington had the most flexible schedule as far as online and accredited programs,” Johnson said. “And they had a good reputation.” Thus began a four-year journey that was both challenging and rewarding.

“Online education has come a long way, and they are not giving away degrees,” he said. “If anyone has any inclination that online degrees are easy, they’re crazy. Not that it’s super difficult, but the work never slowed down.”

The title of his dissertation was Employer Willingness to Hire Individuals Convicted of Drug Crimes in Central Virginia. In researching it, Johnson surveyed large and small employers throughout the Virginia counties of Orange, Madison, Culpeper, Nelson, Louisa, and Albemarle, as well as the City of Charlottesville. He discovered that 53 percent of the respondents would be willing to hire people previously convicted of drug offenses.

He calls working on his doctorate “one of the most rewarding experiences I’ve had academically.” He especially appreciated the efforts of Dr. Jason James, assistant professor in the DBA program, who was his committee chair.

“Dr. James is a stickler for doing things right,” said the newly-minted Dr. Johnson, “and he helped make me a lot better writer. It was challenging but fulfilling and my writing skills greatly improved during the course of the program.”

Calling Dr. Johnson “passionate and committed,” Dr. James said: “I met Richard a number of times because he would prioritize coming to campus when he was in the area so that he could meet face-to-face with his dissertation committee – myself and Dr. John Sparco (director of the College of Business). Richard was serious about helping people. I described his research work as being noble and forthright. While working with Richard, I noticed that he exhibited tenacity, discipline, and he remained interested in continuous improvement.”

Dr. Johnson again drove north to Wilmington last January to don his tam, and was impressed by the ceremony, calling it “better than some military functions I’ve been a part of.”

Reflecting on his four years at WilmU, he said, “I chose to pursue my doctorate because, as cliché as it sounds, I have been on a lifelong quest for knowledge of business, group dynamics, and other organizational concepts. I believe that the DBA program was the best route to obtaining an understanding of a few business principles that directly impact things that I have always been interested in. And as I stated in my dissertation, I sought my doctorate to prove to the young people of my community that if I could achieve such a milestone, then so could they.”