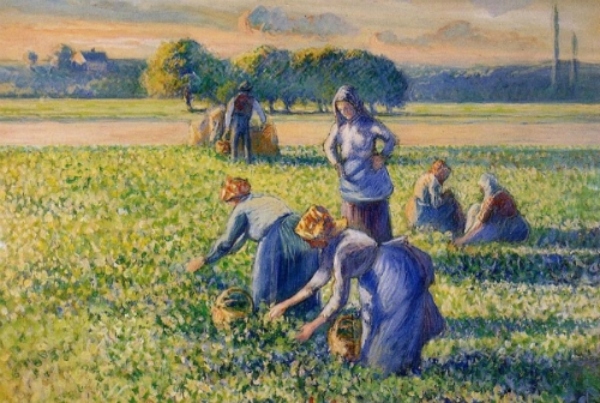 A French appeals court has ruled against Bruce Toll, a partner in Horsham-based Toll Brothers, and his wife, Robbi, in a Pissarro painting ownership case. Image via Intermountain Jewish News.

A French appeals court has ruled against Bruce Toll, a partner in Horsham-based Toll Brothers, and his wife, Robbi, who were attempting to get back La Cueillette des Pois – or Picking Peas – painting by French impressionist painter Camille Pissarro that was looted during WWII from a Jewish collector, according to a staff report from the Intermountain Jewish News.

The court upheld the ruling that the artwork should be returned to the family of Jewish businessman Simon Bauer, to whom it originally belonged. The Tolls, who are also Jewish, claimed they did not know the artwork was stolen when they purchased it for $800,000 in New York 25 years ago.

During the war, the Vichy regime in France collaborated with the Nazis and stole 93 paintings from Bauer. Several of the paintings were returned to him immediately after the war, but he died in 1947 before he was able to retrieve the famous Pissarro painting.

In addition to being a partner with the luxury home-building company, Toll serves as chairman of Philadelphia Media Holdings, owner of the Philadelphia Inquirer and Philadelphia Daily News newspapers.

Read more about the court case at the Intermountain Jewish News by clicking here.

Toll Brothers Prepares to Move to Fort Washington, Its Horsham HQ Goes Up For Sale