A Match Made at Montgomery County Community College 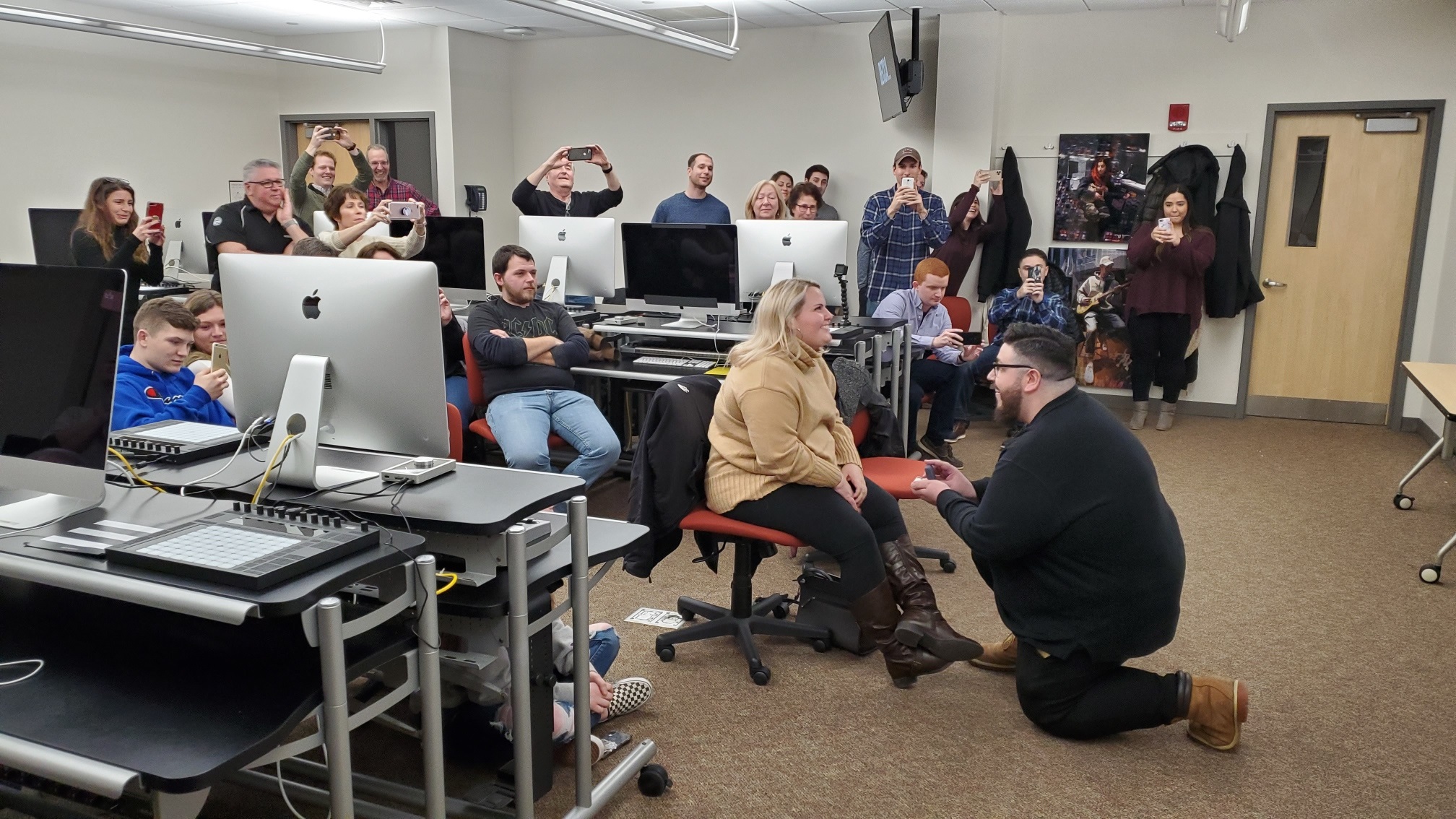 Sometimes love starts with a simple smile and some laughter.

Montgomery County Community College alumni Rebecca (Becca) Martin and Nick Vergara, both of Quakertown, first met when Martin was taking an Introduction to Audio class. Vergara briefly stopped in to ask the professor a question before class and made a comment to Martin.

“I said something stupid, and she laughed. I’m not that funny, so it was probably a pity laugh,” he said.

After that moment, though, he continued to stop by and talk to her, and soon they started dating. 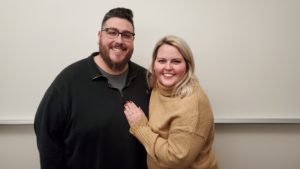 What started with a casual comment blossomed into a relationship that grew stronger every day, as they completed their education at Montco and then graduated from Temple University. Recently, the couple became engaged – in the very classroom where they met at Montco’s Central Campus in Blue Bell.

From the beginning, Montco has been a special place for them.

“We had the absolute best experience,” Martin said “Our professors are such talented people, and we couldn’t ask for better role models. The friends that we met at Montco will hold a special place in our hearts for a lifetime.”

Martin started taking classes at Montco in August 2010 in Pottstown after graduating from Upper Perkiomen High School in Pennsburg. Her grandmother had recently passed away and she wanted to stay close to her home to be near her grandfather. She was undecided on her major initially but then choose Communications when she started taking classes in Blue Bell in 2013.

Vergara choose to go to Montco because he was undecided what he wanted to do after graduating from Perkiomen Valley High School in Collegeville.

“There’s a lot of pressure coming out of high school to make a decision that decides the rest of your life, and I kept changing my mind on what I wanted to do,” he said. “It made the most sense to attend Montco, and I’m glad I did.”

When he started in the fall of 2011, he was an education major, which he later changed to Communications.

While at Montco, both Martin and Vergara spend a lot of time in the Advanced Technology Center, both for classes and extra-curricular activities, including Montco Radio, the student-run radio station, and The Buzz Update, a weekly broadcast created by students in the Communicating Arts Production Group club.

“Some of our favorite times were when we would work on group projects, especially for end-of-the-semester screenings,” Martin said. “They are the times I will never forget.”

Each semester, members of CAPG create video projects that they show during a special screening event held in Montco’s Science Center Theater. Friends, families and the community are invited to attend the screening and see the students’ work.

Both Martin and Vergara finished their courses in fall 2014 and graduated from Montco. They continued their education at Temple University where they majored in Media Studies and Production.

Martin graduated from Temple in May 2017 with her bachelor’s degree, and today, she works full-time at Univest Bank and Trust Co. She also works part-time with Rival Productions, which is owned and operated by Andrew Herbert and Tyler Emel, who are Montco alumni.

When Vergara wanted to ask Martin to marry him, he decided to create a video.

“I knew I wanted to tell a story, but I didn’t have anything super concrete,” he said. “I talked to my close friend, Andrew Herbert, who is extremely talented. We put our minds together, along with a few other friends and Montco alumni, and we came up with what we did.”

The video is a story about how Vergara lost the ring and retraces his steps to find it. It incorporates themes and characters from some of their favorite movies and TV shows and includes many of their friends and family.

When asked about his future bride and what he likes most about her, Vergara’s answer is simple.

“What’s not to like? She’s a beautiful blonde with a smile that lights up a room,” he said. “She’s super smart and her sense of humor is out of this world. I laugh every day. She brings genuine joy, not only to my life, but also to everyone around her.

To convince Martin to come to Montco, Herbert told her that he was recording testimonials of students and alumni for a reality show on campus.

When she arrived at Montco, Vergara met her and took her to room 129 where their close friends and family were gathered.

“When I opened the door, everyone shouted ‘surprise’ and I was awestruck,” said Martin, who was ushered to a chair to see the video Vergara spent two years creating for her.

“What do I like most about Nick? He has the biggest heart and the most amazing sense of humor,” she said. “He is also insanely talented. His eye for creativity and ability to tell a story through video and audio is amazing. Most of all though, I love his dedication to our life, our love, and our family. He’s truly just the best person on the planet; I’m the luckiest girl in the world to call him mine.”

Diane VanDyke is the Director of Strategic Communications at Montgomery County Community College.