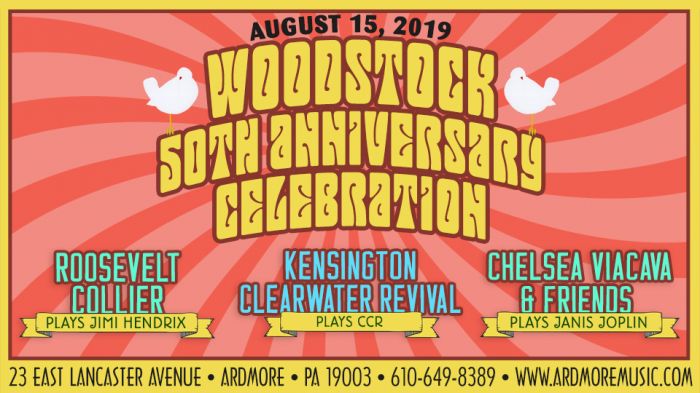 A veritable combination of the finest musicians on the local and national music scene will converge on the stage at 23 East Lancaster Avenue in Ardmore for a celebration of the music of the 1969 Woodstock Festival.

A veritable combination of the finest musicians on the local and national music scene will converge on the stage at 23 East Lancaster Avenue in Ardmore for a celebration of the music of the 1969 Woodstock Festival. Featuring the likes of pedal steel master Roosevelt Collier, The Kensington Clearwater Revival, and Philly vocal phenom Chelsea ViaCava performing tributes to classic rock icons, this celebration is DEFINITELY happening.

Leading the charge will be a tribute to Janis Joplin – the blues/rock songstress known for her unique and gritty vocal stylings – lead by Chelsea ViaCava & Friends. ViaCava is a vocal powerhouse in her own right, being a staple in several successful Philadelphia area bands for years, including Swift Technique and Steely Dan tribute Countdown To Ecstasy – as well as joining the fray with Melvin Seals & JGB recently during their last play in Ardmore. She will be joined by several friends from the Philly jazz and jam worlds for her set including guitarist Jeremy Savo of Out of The Beardspace, drummer Max Young of Cocktail Party Phenomenon, keyboardist Logan Roth of Trap Rabbit, and bassist Mitch Beer of Brian LaPann Trio.

Adding some more swampy rock to the night will be a special tribute to the Creedence Clearwater Revival from a fast growing Philadelphia staple, The Kensington Clearwater Revival. Formed just last year, KCR has played a few shows and quickly asserted dominance as one of the greatest tributes that this area has ever seen. KCR is comprised of some of the hardest rocking Philly cats on the scene today including mainstay guitarist Jeff White, rising star Ali Awan, Owen Stewart of Ruby The Hatchet, bassist RJ Gilligan and drummer Tony Dunst.

Headlining the night will be pedal steel master Roosevelt Collier leading a tribute to the psychedelic guitar overlord Jimi Hendrix. The soft spoken bandleader is no stranger to the Hendrix canon. Roosevelt regularly leads his world famous “get-downs” featuring a mixture of “superstars and church folk,” his own Jimi Hendrix style all-star trio, and recently released the long-awaited Roosevelt Collier debut record, which features an incredible mixture of blues, gospel, rock, and funk all rolled up by producer and bandmate Michael League (of Snarky Puppy).

Features of Ardmore Music Hall include a state-of-the-art sound system, a wide dance space, seating options, and 20+ craft beers on draught. The venue is located at 23 East Lancaster Ave, and is easily accessible by public transportation with the R-5 regional line- the Ardmore train stop drops 100 feet from the back door and runs directly from City Hall & 30th Street Station. Visit the AMH website for the most up-to-date information about the venue and a full listing of upcoming events – www.ardmoremusic.com