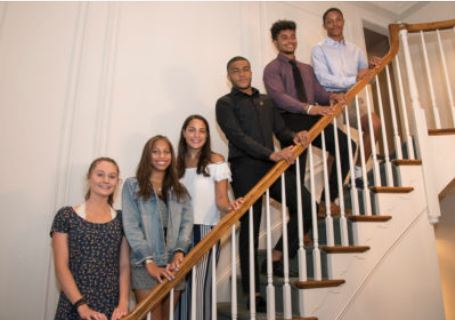 In eight years, Horsham-based Edward Taylor Coombs Foundation has distributed more than $550,000 in merit scholarships to visionary leaders of tomorrow who exhibit exceptional promise in academics, sports and community service.

Golf Committee member Forrestine Coombs, who helped start the Foundation in 2011 along with her husband, Eric, and their daughter, Erin, said she was pleased to offer $6,000 more in scholarship funds as compared to 2018.

Hatboro-Horsham School District Superintendent Curtis Griffin, a member of the ETC Foundation scholarship committee, said he continues to be amazed at the high caliber of student scholars.

“I always have a couple ‘wow’ moments,” Griffin said. “There are some phenomenal students. I’m wowed every year.”

In addition to maintaining good grades, Griffin said he’s amazed that students also are engaged in the community and involved with sports as well.

“I work with really talented students every day,” Shaw Horton said, adding that the committee received applications from a diverse group with great leadership and career focus. “Those are the characteristics we saw in Edward.”

Scholarship recipients were as follows:

DeYona, a Bishop McDevitt High School graduate, consistently dedicates her time to community service projects, including Best Friends Club and Reading Olympics. She received the Coaches Award for Cheerleading and the Winter Sports Athlete’s Award. DeYona was a member of the Spanish Honor Society and Fashion Club.

Israel is dedicated to a life of service, he vows to provide time, leadership skills and love for STEM to encourage and motivate youth to make responsible choices. Israel won the award for best catapult design in his Engineering 2 class at Plymouth-Whitemarsh High School. Winning the ETC Foundation scholarship inspired Israel to pay it forward. In a thank you letter, he wrote that he hopes to “bless someone with service,” adding, “I want to help others just as you have helped me.” He plans to attend Penn State University to study computer science.

An 11-time state champion athlete and 5-time All-American, state record holder and nationally ranked, Thelma is equally as active in the community. She teaches Sunday school at her church and volunteered with the elementary school students on Girard College’s campus. She will be attending Louisiana State University and studying kinesiology.

Khaalid has volunteered with the ETC Foundation since 2014 and has been an active participant in Relay for Life. His hard work is evident in the classroom and on the lacrosse field. He intends to pursue a Business degree at Florida Atlantic University.

Kimhai was an integral part of the Girard College community as a member of the soccer team and mock trial program. He spearheaded a diversity club for Girard College High School students. He worked in the school’s admissions office and served as a student ambassador. Kimhai participated in the Philadelphia Asian American Film Festival and taught English to students in Cambodia. He will be studying biological science at Drexel University.

Shane is committed to diversity and inclusion and focused his leadership in the Haverford School’s Black Student Union, Diversity Alliance and Jack and Jill of America. He looks forward to playing football at Hampton University where he plans to major in broadcasting and sports journalism.

A Hatboro-Horsham High School graduate, Nancy was involved with the Hatters Interact and Hatters Included. Focused on becoming an educator, she works at the YMCA childcare center, volunteers with the Special Olympics and teaches kindergarten prep. She will pursue a degree in Early Childhood Education at Gwynedd Mercy University.

An Urban League Scholar, Shanike is a graduate of the Philadelphia Magnate School, Center City High. She will attend Penn State University to pursue her lifelong dream of becoming a physician, majoring in Pre-Med.

Zachary finds success academically as a hard-working class leader at Hatboro-Horsham High School. He served as captain of the varsity soccer team, was a member of the National Honor Society, Link Crew, Key Club and Future Leaders of America. He plans to attend Penn State University to major in accounting.

Kelandra intends to pursue a career in dermatology to merge her passion for medicine and entrepreneurship. She has taken college-level classes in sociology, psychology and biology to further prepare her for college science courses. During her senior year at Girard College, she conducted an independent research project to test the effectiveness of sunscreens over extended periods of time. She worked in the Girard College Advancement Office and the Historical Records Office on campus. She will attend Temple University and major in biology.

Elise models all five of Girard College’s five core values – integrity, responsibility, compassion, self-discipline and respect. She led small groups of 20 to 30 students while participating in the World Affairs Council of Philadelphia’s Global Forum. She was chosen to participate in a two-week internship on a farm in North Carolina, where she learned sustainable gardening techniques and innovative marketing strategies. She received the award for best advocate as a member of Girard College’s mock trial program. She will attend Temple University, where she will study business management.

Colin received honors and high honors during his studies at William Penn Charter School. He enjoys math as a foundation and applying it to real-world scenarios. Colin is a four-year member of varsity soccer, implemented the Black Boys Project, served as vice president of his Jack and Jill chapter and was actively involved in Penn Charter’s Black Student Union. He will continue his pursuit of a STEM-based career at Howard University, where plans to major in mechanical engineering.

Caroline has remained in the top 10 percent of her class throughout her time at Hatboro-Horsham High School. She was on the varsity cross country team, varsity track team, was an honorary member of the Key Club and a member of the National Honor Society. She has volunteered with the Jewish Relief Agency, Scoogie Events and the Special Olympics. She plans to study bioengineering at the University of Maryland.

A member of the National Honor Society, Talia excels outside of the classroom as well. She has trained and performed with several dance teams, was involved with student council and worked as a camp counselor. She has enhanced her knowledge base and love for science by attending Camp Cardiac and the Georgetown Medical Institute summer programs. Talia will attend University of Virginia and major in chemistry.