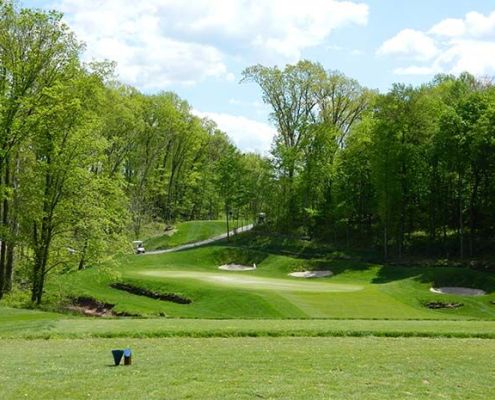 The ninth stop on the 2019 “Road to the LPGA” takes the Symetra Tour to Raven’s Claw Golf Club in the Keystone State for the second annual Valley Forge Invitational from May 31-June 2.

Click Here for your free guide to
public golf courses in Montgomery County!

Defending champion Louise Ridderström (Stocksund, Sweden) is not among the competitors. She won the inaugural edition of the tournament in 2018 thanks to a competitive course record 8-under par 63 in the final round. Furthermore, Ridderström finished tied for 36th at the inaugural LPGA Q-Series to earn Priority List Category 14 status for the 2019 LPGA Tour season.

Action gets underway at 7:00 a.m. ET with play starting off No. 1 tee all three days. Meanwhile, a trophy presentation on No. 18 green is set to take place following the completion of the final round.

WOODS TO MAKE FIRST SYMETRA TOUR START SINCE 2014
When competition begins on Friday, it will mark the first start for Cheyenne Woods (Phoenix, Arizona) on the “Road to the LPGA” since the 2014 Symetra Tour Championship, where she collected one of her four top-15s that year.

“I watch the Symetra [Tour] leaderboard almost every week because I have a lot of friends that play out here,” said Woods. “It is really deep and very competitive. You are seeing girls here from the States, but also internationally playing really great golf. The Tour has grown quite a bit and strengthened, which is cool to see. Especially this year when I am bouncing back and forth, it’s nice to know I can come here and still have great competition to play against. The courses are awesome too, they look so good.”

Woods finished tied for 51st last November at the inaugural LPGA Q-Series to gain conditional status on the LPGA Tour. In February, she was part of the fields for the ISPS Handa Vic Open and ISPS Handa Women’s Australian Open, then competed in her first domestic event on the big stage last week at the Pure Silk Championship presented by Visit Williamsburg.

In addition, Woods has made two starts on the Ladies European Tour and attempted to Monday qualify at four LPGA events. On two occasions, she missed securing a spot by one stroke. The Wake Forest University alumna is now preparing to continue her path back to the LPGA by playing the Valley Forge Invitational.

“At the end of the day, I just want to play golf and no matter where I play, I want to play the best I can,” said Woods. “If I can have the opportunity to play, eventually I’ll get back to where I know I can be. That is the mindset every day I work on my game. No matter where I tee it up, I’m going to give it my all.”

RetailNew Shoe Store in Pottstown Has “Sole,” Thanks to BIG Business IncentiveSeptember 16, 2021