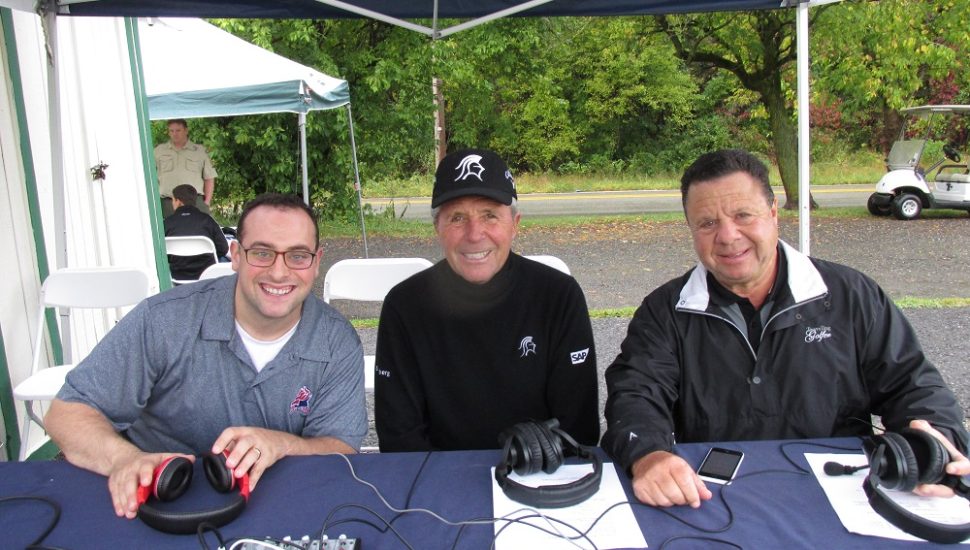 GolfTalk Live went on-air in March of 2006 on 990AM WNTP, and has had a stellar lineup of guests each year, including multiple major winner Gary Player, above, middle. At left is Eddie Caiazzo (Producer), and Tony Leodora (Host) (Image courtesy Golf Talk Live)

Thirteen years ago, the entertainment business had a lot of fun with the “Number of the Beast” — 666.  June 6, 2006, specifically, was when the Book of Revelations was supposed to go down in real life.

In March 2006, however, award-winning sports journalist Tony Leodora took the chance that the world would still be there three months later, and decided to re-enter the world of sports radio.  This time, instead of sports in general, the topic was golf.

“In the beginning, we thought this would be a show generated from the studio each week,” Leodora admitted. “We did the first show from the studio and immediately got a call from a golf course that asked if we could do the show from their location the next week. Since then we have done the show on-location every week for the last 13 years, except for one week when we were limited by a huge snowstorm and the annual Producer’s Revenge show that his hosted by our producers at the WNTP studio.”

The format of the program wouldn’t rely on call-ins from listeners, but rather feature interviews with golf professionals, players and executives that impact the game across the region and the country.

Since its inception, the show has been named the “#1 Golf Radio Show in America” three times by the International Network of Golf.  It also gained the Pennsylvania Association of Broadcasters highest honor for Judge’s Merit three consecutive years.

GolfTalk Live airs every Saturday on the flagship station 990AM WNTP Philadelphia at 7:00 a.m. and 7:00 p.m., in Bucks County, Montgomery County and the Lehigh Valley on 98.5 WNPV, and down the Jersey Shore on 1400 AM WOND.  The shows are archived at www.GolfTalkLive.net.