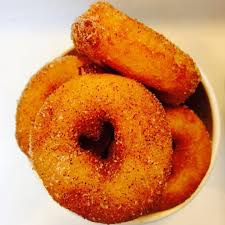 It was time for DonutNV to put down roots, and for those donut lovers in the Pottstown area, the news couldn’t be better.

Located at the corner of S. Hanover Street and Industrial Highway — DonutNV is located in the Hanover Square development.

“It has been going great, very steady since we opened,” said owner Alex Gingold Monday morning during the shop’s grand opening and ribbon cutting. “It has kind of come in waves: first it was the people that live in the townhomes in the community, then commuters, and now, families.” Gingold’s partner in DonutNV is his wife Amanda Gingold, writes Donna Rovins in The Times Herald.

The DonutNV shop is about 1,000 square feet, according to Gingold, has a small arcade and seating for about 20.

“We’re more than a donut shop. DonutNV is a place to hang out, grab a coffee and a donut on the way to work; a place to bring the family after work or come in on a Sunday morning,” he said, adding with the central location will attract, commuters, Montgomery County Community College students and residents of the Hanover Square townhomes.

While new to Pottstown, the Gingold’s business is not new. The couple launched their first mini-donut kiosk — under the name Cinnamini Donuts — in 2014, at the Philadelphia Premium Outlets in Limerick. In 2015, they added their first mobile kiosk as demand grew for the custom made treats. They now operate three mobile units — catering parties, weddings, special and corporate events, according to Gingold.