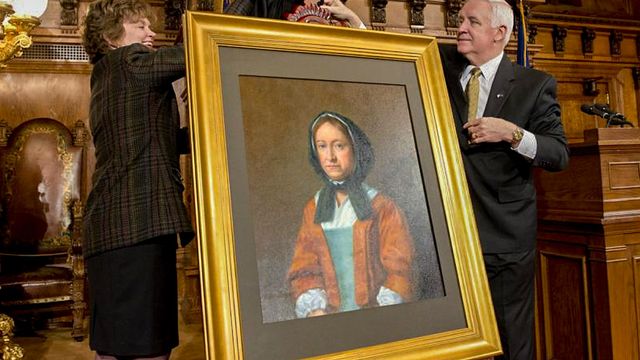 A portrait of Hannah Callowhill Penn hangs in the Governor's Office. Image via the Commonwealth of Pennsylvania.

Hannah Callowhill Penn was Pennsylvania’s first and only female leader, and she ran the state for close to 14 years after her husband William Penn fell ill, writes Mónica Marie Zorrilla for Billy Penn.

Callowhill Penn was born in England in 1671. Her parents disregarded the norms of the 17th century and taught their daughter accounting and management skills. At the age of 24, she met William Penn when he was 52. They married in 1696.

They soon moved across the ocean to Pennsylvania, where Callowhill Penn refused to play the role of housewife. Instead, she rubbed elbows with government officials and wealthy men who conducted business with her husband. These relationships were crucial during her gubernatorial term.

Penn’s debts forced the pair to return to England. In 1712, William suffered a number of strokes that left him mentally and physically incapacitated.

Callowhill Penn eventually took on her father’s business and started paying off her husband’s debt. As Acting Proprietor of Pennsylvania, she also successfully protected it from claims by Lord Baltimore of Maryland.

Callowhill Penn led the colony until her death in 1726.