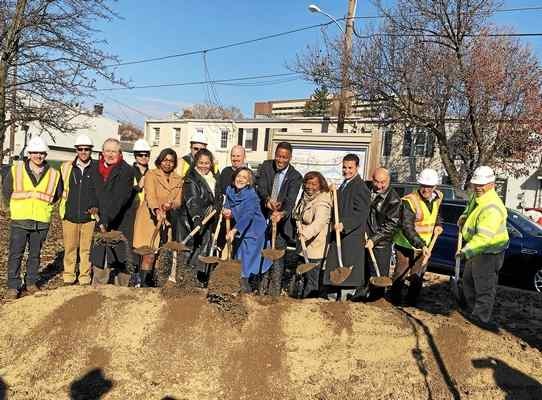 Phase 3 of the Lafayette Street Corridor construction is expected to cost $19.5 million, with the county’s share being $3.9 million. A groundbreaking ceremony was held at Lafayette and Ford streets in Norristown. (Image courtesy The Times Herald)

The long awaited extension of the Lafayette Street Corridor Project is finally making its way into Norristown. The project has transformed an intersection in Plymouth Township that was a decades long headache for traffic, and now Norristown will begin to see the benefits of the road work, which will eventually result in a true Norristown exit off the Pennsylvania Turnpike.

The project is expected to make a significant impact on Norristown’s ongoing revitalization.

Phase 3 will reconstruct Lafayette Street between Barbadoes and Ford streets in Norristown, widen the street and sidewalk, relocate part of the Schuylkill River Trail, and create a new trail hub in Norristown. It will also will beautify the existing Lafayette Street and widen it to make a welcoming boulevard for traffic coming from a new turnpike interchange and make the Schuylkill River Trail more accessible to the public, as well as connecting it to the popular Chester Valley Trail.

The groundbreaking ceremony took place at Lafayette and Ford streets.

“We are very pleased to take another step forward on the Lafayette Street extension project that showcases what is possible with smart, forward-looking investments in our infrastructure,” Val Arkoosh, chairwoman of the Montgomery County commissioners, said in a press release.“This project will create safer and more efficient commutes for those who live or work in Norristown and encourage more people to visit our county seat for shopping and recreation.”

Phase 3 construction is expected to last about two and a half years and cost $19.5 million, with the county’s share being $3.9 million.

Sheriff’s Office Mourns Passing of Bikkel, the Only Bomb-Sniffing K-9 in Montgomery County