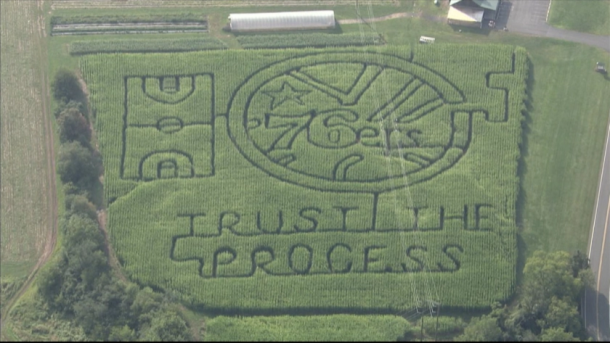 R&J Farm Market in Souderton has unveiled an amazing corn maze that celebrates the 76ers and their famous rallying cry “Trust the Process.” (Image via NBC Sports)

One Montgomery County farm is determined to keep the vision of the former General Manager and President of Basketball Operations of Philadelphia 76ers, Sam Hinkie alive, writes Darryn Albert for Yard Barker.

Over the weekend, Souderton’s R&J Farm Market unveiled the “Trust the Process.”

It is a maze or perhaps ‘maize’ that has been created entirely from corn plants and features his now legendary slogan and the 76ers logo. It will be open to the public in less than a month.

Both the players and the coaches of the legendary Philadelphia basketball team have embraced the rallying cry made famous by Hinkie, even more so after his resignation from general manager last year. Joel Embiid even asked the team’s announcer to include his newly minted middle name, “The Process,” into his official introduction last year.

However, as proven by the Souderton farm, those who are truly devoted to the beloved Process are still the team’s hometown fans. They have still not accepted his departure and still chant his name at every game.