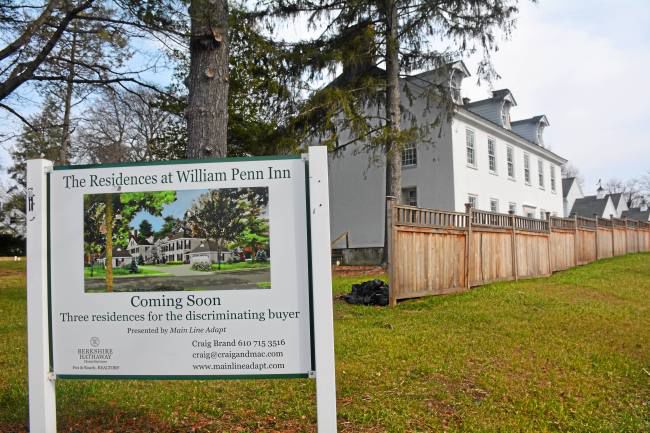 The partnership that recently bought Lower Merion’s historic Charles C. Knox House has been given an extension by the township to decide on development plans. (Image via Main Line Times)

The Knox Home and William Penn Inn projects in Lower Merion that were supposed to prevent the two historic structures from being demolished are stuck in limbo while waiting for new owners, writes Cheryl Allison for Main Line Times.

Two years ago, the planned future of the two properties which date back to 1856 and 1799 respectively, included proposals that would save the two landmarks from full or partial demolition.

However, both buildings still remain vacant.

The William Penn Inn is listed for sale at $1.775 million with its planned renovation and conversion into three luxury condominium units only partially complete. According to Mac Brand, a principal in the partnership which purchased the property two years ago, the goal is to sell to a builder for the completion of the project.

Brand was also a partner in the proposed redevelopment of the Knox Home property. However, her position as the equitable owner of the parcel ended last October when the planned sale did not go got through. The property returned to the market soon after at a list price of $2.775 million, and is currently under a new agreement of sale.

Read more about the troubled projects at Main Line Times by clicking here.