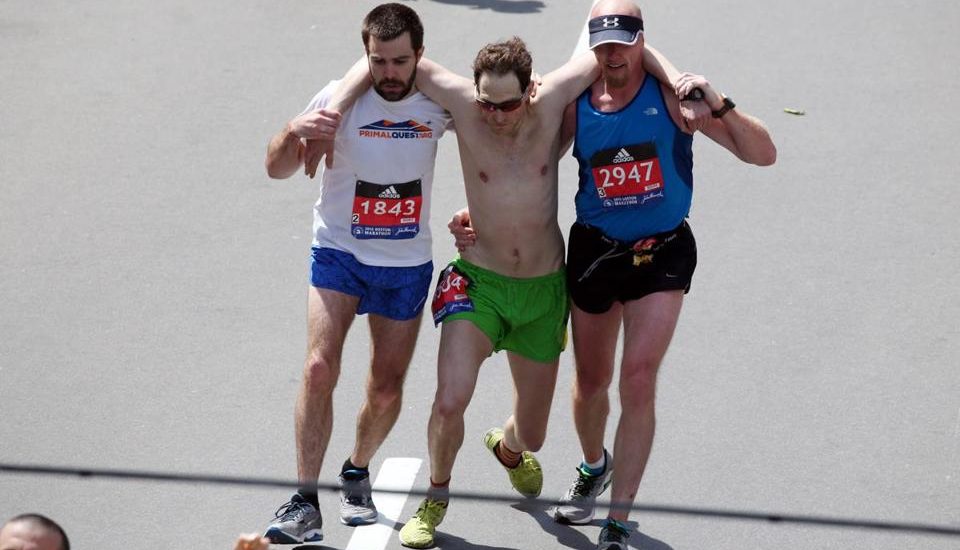 A photograph of two runners helping another across the finish line at last week’s Boston Marathon has gone viral, writes Alison Wade of Runner’s World and Rachel G. Bowers of the Boston Globe.

Thirty-one-year-old Ari Ofsevit of Cambridge, Mass. collapsed approximately 100 yards from the end of the race and fellow runners Mitch Kies and Jim Driscoll, an Ambler resident, stepped in to help carry him across the finish line.

Meb Keflezighi, the 2014 Boston Marathon champion, saw the trio on their way to the finish and tweeted a photo, which went viral.

Driscoll, 25, recalled seeing two runners struggle to help Ofsevit as he approached, and he decided that if they weren’t making more progress by the time he got there, he would step in. He and Kies threw Ofsevit’s arms over their shoulders and carried him to the finish line.

As soon as they crossed the line and called for help, medical personnel arrived almost immediately. Driscoll and Kies gave each other a fist bump without exchanging words and went off to collect themselves.

“It was like, ‘Okay, thanks for helping out,’” Driscoll told Runner’s World. “We didn’t really need to say a whole heck of a lot; we knew what each person was thinking.”

Ofsevit was taken to Tufts Medical Center with an internal temperature of 108.6 degrees. Medical professionals put him in an ice bath and lowered his temperature to 88 degrees.

“I want to thank both the guys who helped me across the line, and then the folks in the med tent, and the doctors,” Ofsevit said. “Apparently I came pretty close to dying, so I’m very, very, very grateful for all their help.”

Driscoll finished in 3:05:11 and already has a faster time from another race that should get him into the 2017 Boston Marathon, should he choose to run.