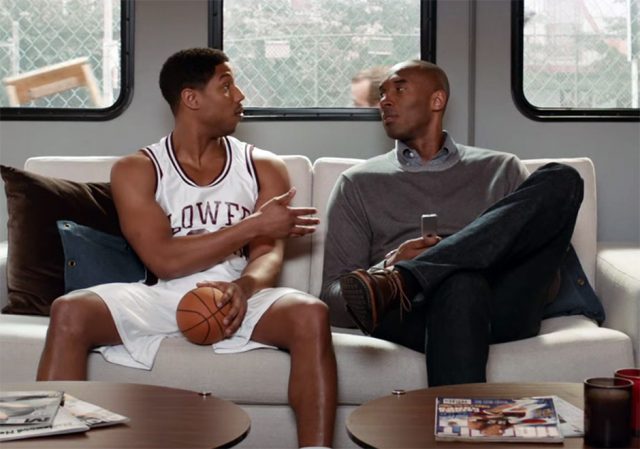 For area basketball fans of a certain age, it seems like just yesterday when Kobe Bryant capped his All-American career at Lower Merion High School with a state championship and by being selected 13th in the 1996 NBA Draft.

Bryant has one more game left in his professional career, which culminates at the Staples Center in Los Angeles Wednesday as the Lakers host the Jazz.

Seizing the opportunity, Apple released a 60-second ad for its Apple TV with Bryant and Creed star Michael B. Jordan, who’s preparing to portray the aging hoops star in a fictional (for now) Bryant biopic, writes Brett Klein of Philadelphia Magazine.

Bryant, however, is under the impression that Jordan will be portraying “young Kobe” – the injury-free, “cold-blooded assassin” of yesteryear, as Bryant describes himself. Jordan, who is wearing Bryant’s white and maroon high school uniform from Lower Merion, offers that his character is “locked in a battle with Father Time.”

“Oh, they didn’t tell you?” Jordan says. “I’m playing you all the way through now. I mean with makeup and prosthetics and stuff like that.”

He proceeds to tell the Apple TV to pull up The Curious Case of Benjamin Button, fast-forwards with his voice, and freezes the screen on Brad Pitt as a withered old man.

“Get out of my trailer,” Bryant responds.