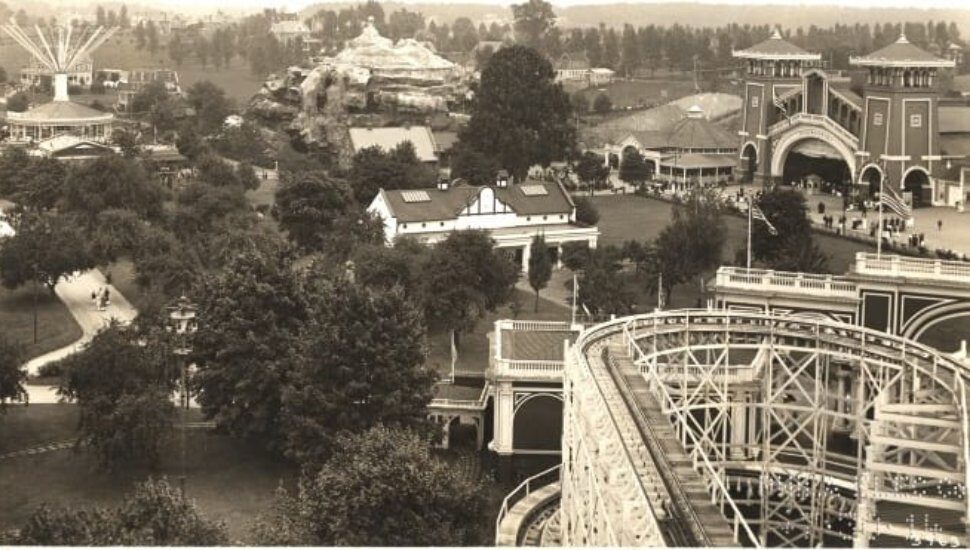 After opening in the mid-1890s, Willow Grove Park and its roster of entertainment and amusements quickly drew hoards of visitors from Philadelphia and its surrounding suburbs. Stacia Friedman covered the draw of this Montgomery County entertainment mecca for Hidden City Philadelphia.

The amusement park was started by owners of local trolley companies who were looking to promote their transit lines.

In 1896, they opened an acoustically dynamic bandshell where the music alternated between the patriotic marches of John Philip Sousa and classical music selections. These free concerts were known to draw up to 52,000 people and earned the park the title of “The Music Capital of America.”

Another major attraction was the 10-acre man-made lake that featured the nation’s tallest electric fountain. On Saturdays, visitors could enjoy a fireworks display there.

There were also plenty of other attractions, including a casino, a restaurant, and a movie theater. A spectacular carousel was added in 1906.

Over five million people visited the park during its first season, prompting the addition of three new trolley lines to meet the demand.

The park reached peak attendance before World War I. Over time, visits slowed, and by 1976, the amusements, food concession stands, and other entertainment infrastructure were demolished to be replaced by Willow Grove Park Mall.

Editor’s Note: This MONTCO Today post was last published on Apr. 9, 2022; it has been reviewed for ongoing accuracy.

Tux Cat Studios show this great video of the Willow Grove Amusement Park before its site became a mall.

Owner of Plymouth Meeting, Willow Grove Malls Has an Unconventional Idea to Pay Off Debt