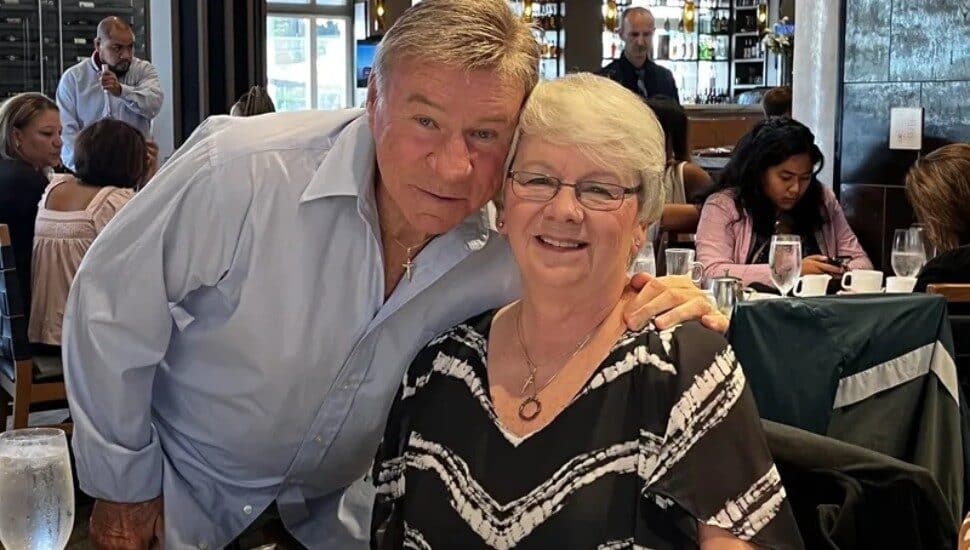 Image via The Philadelphia Inquirer.
Joe and Lynn Horne have been married for 50 years.

A West Norriton husband and wife who celebrated their 50th anniversary in September has the secret to success. Lynn and Joe Horne follow the “never go to bed angry” rule, wrote Kellie Patrick Gates for The Philadelphia Inquirer.

No one would guess that despite decades of happiness this couple met in the wake of hardship.

When Lynn was just 13 years old, her mother had died of cancer. She therefore moved in with her aunt and grandmother in Philadelphia’s Feltonville neighborhood.

Joe, who was 15 at the time, was their paper boy, a job he took on to support his mother who was experiencing financial hardship.

But it wasn’t always smooth sailing. After three months they broke up and saw other people.

By 1972, the couple married and had family throw a modest wedding party.

The initial guest list of 35, however, grew unexpectedly to 75, and the bash wasn’t over until 6 AM the following day.

Decades later, the couple had a “delayed honeymoon” when Joe won a free trip to Jamaica at a company picnic.

Throughout their years together, Lynn and Joe took care of his mother, who was struggling with cancer. Eventually, they took over care of his father as well.

But along the way, they managed to have two daughters, who have since given them seven grandchildren.

Joe worked as a painter for years before transitioning into construction. Lynn was a caterer for 30 years but retired in 2014. She now occasionally works in a beer garden at a Giant supermarket.

The couple celebrated their 50th anniversary in King of Prussia’s Fogo de Chão Brazilian steakhouse, a surprise dinner from family.

Read more about this West Norriton couple in The Philadelphia Inquirer.

Long-lasting marriages like the Horne’s are worth celebrating;
Steve Harvey found this couple in 2019 that had been married 82 years.

Hatboro Couple Explains Secret to 63-Year Marriage: 'We Like Each Other'