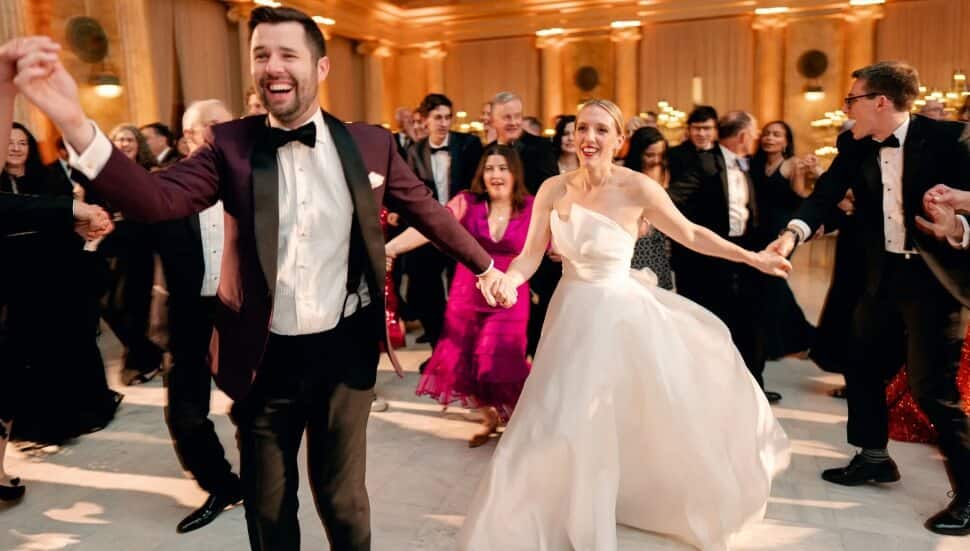 Working together from a small apartment in Philadelphia helped Robert Richardson Flaherty Jr. and Carla Susanne Frank realize they function well together even in nonideal circumstances, writes Sadiba Hasan for The New York Times.

In 2019, the couple, who met in Washington during one of their several jobs in the political field, found themselves drawn together romantically while working on opposing presidential campaigns.

At the time, Frank moved to Philadelphia to work as director of strategic planning on Joe Biden’s 2020 presidential campaign, while Flaherty relocated to Texas to work on Beto O’Rourke’s campaign.

When O’Rourke dropped out of the race, Flaherty took the role of digital director with the Biden campaign and moved to Philadelphia and into Frank’s studio apartment.

“The kitchen table and the bathroom were our two different work spaces, so we’d alternate who had to take phone calls sitting on the toilet, with the laptop up on the sink,” said Frank.

By the time they moved back to Washington in 2020, the couple knew they would be spending their lives together. They made it official on November 19 when they got married at Union Station.

Read more about the couple in The New York Times.

A Would-Be Broadway Star Became a Local Master Pizza Chef, Thanks to Terrible Pizza at His Wedding

After 66 Years, Gladwyne Couple More In Love Than Ever