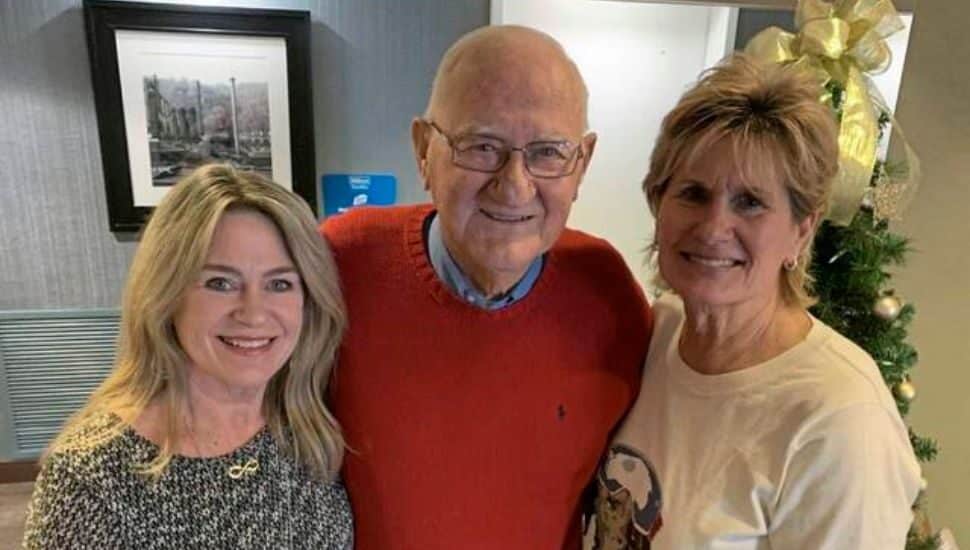 Image via Justin Vellucci at the Pittsburgh Tribune-Review.
Jim Scott, with two daughters.

Scott recalled nothing of his birth family; he later learned of his abandonment at age two on a Pittsburgh doorstep.

He was soon adopted by local couple.

“I was very, very well cared for,” Scott said, reflecting on his upbringing.

He wasn’t even aware of the adoption until 1953, when he applied to the Naval Air Cadets and saw his birth certificate for the first time. His parental line was listed as “unknown.”

Scott kept his past hidden, even as his career as a guidance counselor brought him east to Norristown and he started a family of his own.

When he finally shared the news with his children, his eldest daughter acted on Scott’s Christmas wish to discern any family tree information.

She launched a successful Ancestry.com search that yielded siblings and cousins.

When he finally connected with one half-brother on the phone, his newfound relation joked, “You owe me 86 birthday presents!”

More on Jim Scott and his Christmas-inspired search for family is at the Pittsburgh Tribune-Review.

Amid Plans to Adopt, Gwynedd Mercy Lacrosse Coach and Her Husband Have Two Children of Their Own

When the Stomachs of the Nittany Lions’ Football Players Growl, This Lansdale Dietitian Answers