Mount Kilimanjaro Climb Being Tackled by Firstrust Execs for BBBS 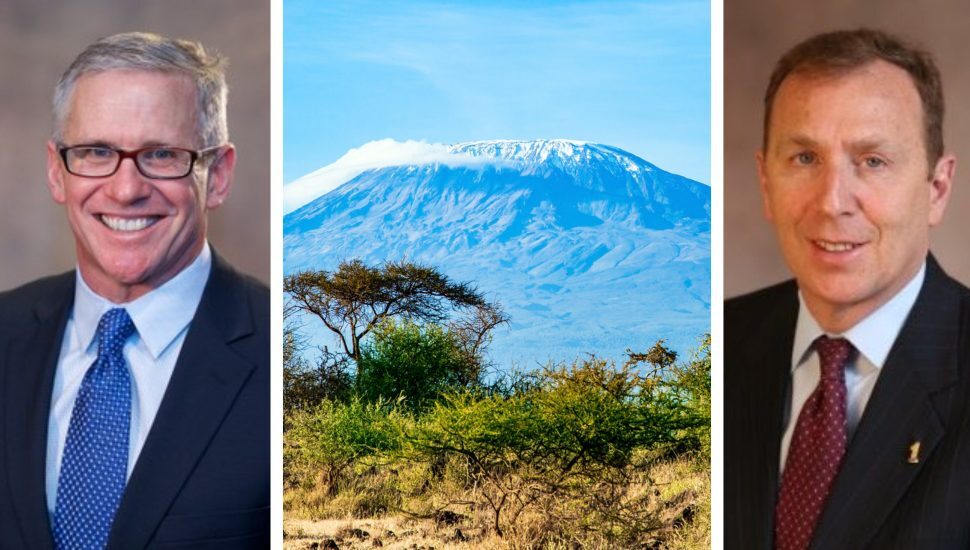 Images via LinkedIn and iStock.
Dinda (l) and Mackler (r) and the formidable challenge they face (c).

Post-Thanksgiving, Firstrust Bank professionals are getting back to work after a long weekend. Two, however, are still away from their desks. And they’re about to get farther, as they depart today for a fundraising trek up Mount Kilimanjaro in Tanzania, Africa.

Both assess different forms of risk for a living.

And today, they’re risking much by rising to this unusual challenge.

Their shared motivation is to aid Big Brothers Big Sisters (BBBS), a Firstrust corporate client, with its 2022 challenge “The Big Adventure.”

That initiative seeks to raise $500,000 by soliciting donations from climbers looking for the ultimate challenge: scaling the world’s highest free-standing mountain (a dormant volcano) above sea level.

Mackler, who learned of the adventure from a BBBS business connection, approached Dinda with the idea.

Dinda, with climbing experience in his past, was eager. “I said to Seth when he told me about it, ‘Not only do I want you to do it, I want to do it with you.’” he related.

They both saw it to give back to a worthy cause — a stance deep in the DNA of Firstrust — while also taking on a significant personal challenge.

Firstrust was behind them all the way.

The Big Adventure asks participants to raise $10,000 in donations for their experiences. Dinda and Mackler made personal donations, and the bank augmented that support to get them over the threshold.

That financial support came from the top down organizationally.

Dinda and Mackler have spent the past few weeks training for the Dec. 1–8 climb. They’ve logged numerous hours in the gym with personal trainers and hiked miles wearing backpacks filled with heavy rocks.

“You know that scene in Rocky IV where he’s training in Russia, running in the snow and through creeks? That’s us,” Mackler explained.

He has also tried to prep for the thinner oxygen levels on the mountain. Its negative effects can cause health issues serious enough to warrant dismissal from the party.

That’s an outcome neither of these participants want to see.

Mackler is therefore wearing a mask during his workouts, one that restricts his oxygen levels to approximate Kilimanjaro’s high-altitude conditions.

The worry of altitude sickness is so acute that before the summit attempt, organizers bring the climbers up and down shorter excursions to allow participants to adjust to conditions.

The final push to the Mount Kilimanjaro summit is a 13- to 15-hour climb.

“I used to camp with my dad as a kid, and I hated sleeping in a tent. But I understand the concept of a comfort zone and that if you live in one, it stays very small. And the only way to get out of it is to make it bigger.

“This is one of those things that I think is going to be good for me — to do something harder than I’ve ever done.

“I’m a little bit scared by it. But I’m confident I’m going to be able to do it. And I’ve got this guy [Dinda] right here, and we’re going to pull each other up that hill.

“Whatever happens. We’re going to do it,” he concluded.

Dinda said, “I’m excited. But I’m also aware of the dangers: I know altitude sickness, the headaches, the loss of faculties.

“I’ve been on tough climbs in tough conditions and seen the adversity.

“I have respect for the mountain.

“But it’s also a great means of working together in a shared goal and methodically overcoming different adversities to reach the summit.

“It becomes a life approach that speaks to resilience and perseverance,” he concluded.

The pair of climbers depart today on their trek. Montco.Today will be following up with Dinda and Mackler upon their return.

Readers can still support the fundraising efforts of Dinda and Mackler online and follow their Mount Kilimanjaro adventure on Instagram.