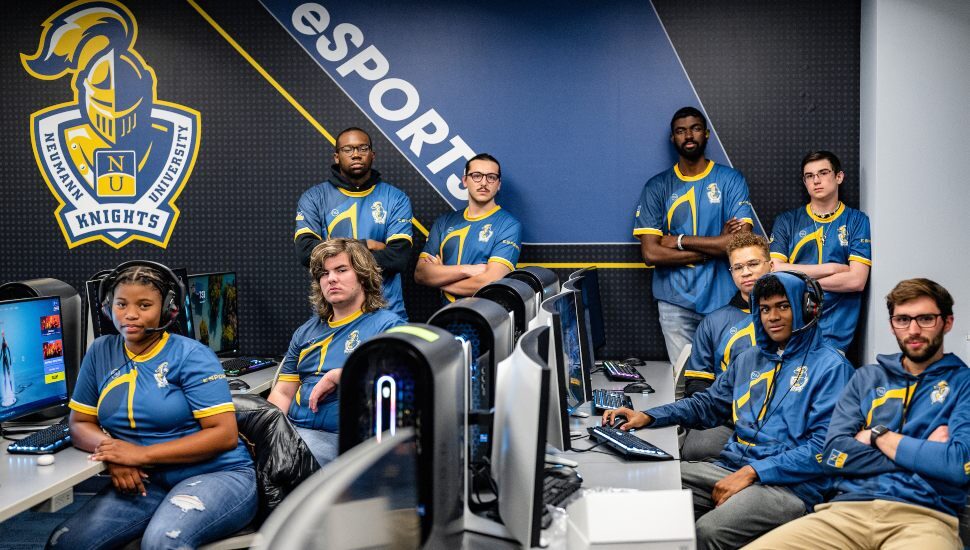 Neumann University is creating a new opportunity for students to major in video game production and it’s happening because of a new technology lab in the School of Business.

The brand-new lab on the third floor of the Abessinio Building is the lair of the campus eSports team, but it won’t be all fun and games for long.

The video gaming lab has rows of 24 Alienware computers, large screens that can display any of the desktop visuals, and an eSports logo that fills an entire wall.

According to Derek Bosworth, head coach of the club, the new lab is “pretty awesome.” Each computer, he said, “has all of the hardware we could possibly need to play any game that’s out there.”

Neumann’s eSports gamers compete against teams from other colleges across the country in classic games like Overwatch 2, Rocket League, and Super Smash Bros.

The ten-person club plays in two leagues, the National Association of Collegiate eSports and the Eastern Collegiate Athletic Conference. Its schedule runs from late September to mid-November and includes matches with Temple, Cornell, Long Island University, Boise State, and the University of Kentucky.

“We actually started streaming matches, too,” noted Bosworth. “You can find Neumann eSports on Twitch TV.”

There are bigger plans for the technology lab, said Business Dean Eric Wellington. This year, he’s looking for a faculty member to teach video game production and plans to offer a major in the field by the fall of 2024.

“We’re eager to launch a video game production major,” says Wellington. “eSports is a billion-dollar industry, so we’re building an eSports degree in order to teach the management side and hiring a faculty member to teach students how to build video games.”

Video game production is a booming industry that offers good-paying jobs in a variety of roles, including game design and production, art and animation, writing (storyline creation), and marketing.

The International Trade Administration estimates that 75 percent of U.S. households have at least one gamer and that eSports will surpass $2.5 billion in revenue by 2024. Insider Intelligence, a company that specializes in digital trends and forecasts, predicts that by 2023 the number of U.S. gamers will reach 181 million.