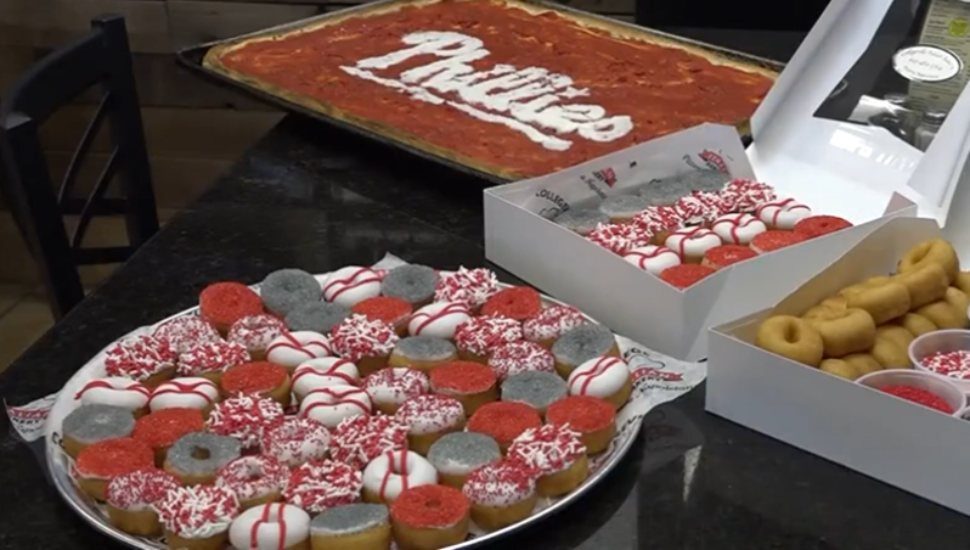 Collegeville Italian Bakery Pizzeria Napoletana spent the afternoon before the Phillies game last night against the San Diego Padres ensuring that local watchers could carb-up ahead of the first pitch. CBS3’s Marcella Baietto served up details on one menu item, a themed dessert, that particularly hit it out of the park.

The shop at 3846 Ridge Pike did brisk business for most of the day. Steve Cacarey, a co-owner, hustled numerous takeout orders of wings, pizza, and pretzels.

But perhaps to bring a sweet victory to the Fightins (ours, not Reading’s), Cacarey and his staff were vending their mini donuts in a Phillies-themed do-it-yourself kit.

The dessert is a take-home treat. Instructions call for the small donuts to be warmed (during a commercial break, no doubt). Then, game-watchers schmear prepacked cups of different colored icings — red and white, what else? — on top.

“Maybe the kids are bored during the game because it’s a long game,” said Cacarey. “Parents want to watch the game. Guess what?” — he motioned to the carry-out box, inferring its ability to occupy a child’s short attention span — “Bingo!”

All that sugar-fueled fandom in front of Montgomery County TVs last night must have had some effect: The Phils rolled to a 4–2 victory in game three of the National League Championship Series, giving the Padres their just desserts by moving ahead two wins to one.

The full report on this home run of a treat from Collegeville Italian Bakery Pizzeria Napoletana is at CBS3.

‘Picked by the One Team I Was Rooting for My Entire Life,’ Pottstown Native Now a Member of Phillies Organization