Pottstown Arts Fair and Cemetery Cleanup Event Was a Success 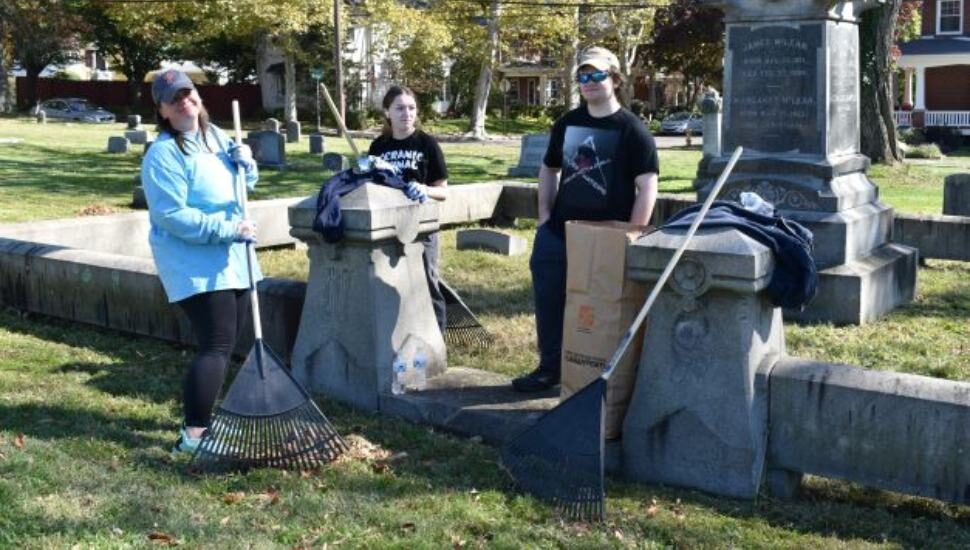 Image via Hobart's Run.
The cleanup of Edgewood Cemetery in Pottstown was accompanied by an art fair and outside music.

Edgewood Historic Cemetery’s Art Fair and Cleanup event on Oct. 22 welcomed about 20 vendors who sold handcrafted wares, as well as about 25 volunteers who tackled autumn groundskeeping projects such as weeding overgrown crypts and planting flowers.

Between rental fees paid by the artists to set up on the grounds, donations, and raffle ticket sales for donated works of art, friends of the cemetery generated a little over $1,000 toward the mowing fund, which needs roughly $20,000 each season.

“The funds raised through this event are a drop in the bucket toward Edgewood’s annual mowing fees,” said Cathy Skitko, director of communications and community relations for the Hobart’s Run initiative. “But nonetheless, the day itself was a definite, uplifting success.”

“Events like this bring community members together to give back to Pottstown,” Skitko noted. “The art fair and cleanup effort highlights the ongoing need for funds and manpower to care for Edgewood’s grounds,” she added.

People who would have liked to volunteer but could not — perhaps owing to an active calendar in Pottstown the day of the cleanup — can still make an online, tax-deductible gift toward the effort. Donations will serve a dual purpose: Help prepare for mowing season 2023. And thank those who helped this year.

Donations are being accepted online or by mail (make checks out to Edgewood Historic Cemetery; mail to 740 E. High St., Pottstown, Pa. 19464).

Groups or individuals who would like to create or be involved with future fundraising events and beautification days should contact Edgewood president Andrew Monastra by email.

Volunteers also are launching an effort for the professional restoration and remounting of fallen headstones, thanks to Edgewood volunteer Kelly Fenstermacher.

The first $3,000 raised toward this specific campaign will allow seven headstones to be professionally repaired.

The public can also support that effort online.

Planners expressed their gratitude to the restaurants that provided food for the workers and artists:

Thanks also goes to the Borough of Pottstown for helping to promote this massive effort and taking away the bags of lawn debris that accumulated throughout the day.

Hobart’s Run Gets ‘Heroic’ Help from Lowe’s in Pottstown, Elverson