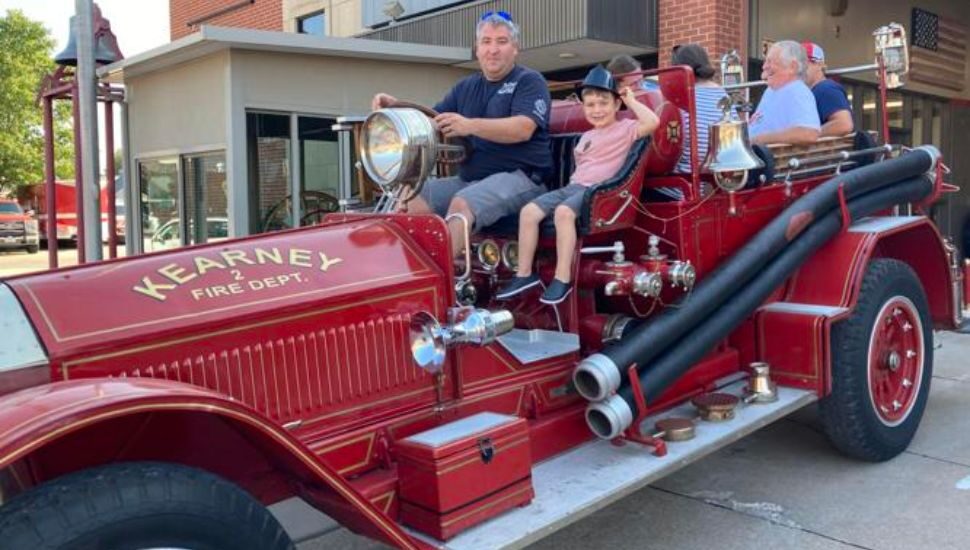 Image via Mary Jane Skala at the Kearny Hub.
The restored 1922 American LaFrance pumper from Kearny, Neb. It was revived by Harleysville expert.

A beloved fire truck from Kearny Neb. was entrusted to Harleysville expert vehicle restorer Hal Fillinger for revival. Mary Jane Skala, of the Kearny Hub, fired up her journalistic skills to present the story.

The truck was a 1922 pumper made by manufacturer American LaFrance, Summerville, S.C., purchased new by the community.

It served in Kearny until 1948, when it entered a not-so-restful retirement: a piece of park playground equipment for kids.

It was later rescued by former volunteer fireman LaMoyne Fern. He painstakingly restored the pumper and gave it back to the city in 2002, where it routinely starred in civic parades and celebrations.

Fern passed in 2016 at age 94, taking his intimate knowledge of the truck’s technology with him.

So when a major engine failure brought the vintage vehicle to a standstill, the fire company’s leaders needed an expert.

Their search led all the way to Hal Fillinger, a Harleysville pro in the exact model the Neb. community sought to make street-worthy again.

The fire station’s leaders nestled the pumper on a flatbed truck that gingerly drove her east.

Overcoming all obstacles (including a need to have engine parts forged) Fillinger revived her.

Back home and on the road, one of the LaFrance’s first passengers was the five-year-old great-grandson of the truck’s original repairer.

More on the work done by Hal Fillinger to revive a treasured truck is at the Kearny Hub.

If No One Joins, No One Responds: Whitemarsh Township Fire Companies Need Volunteers to Stop Fires and Save Lives