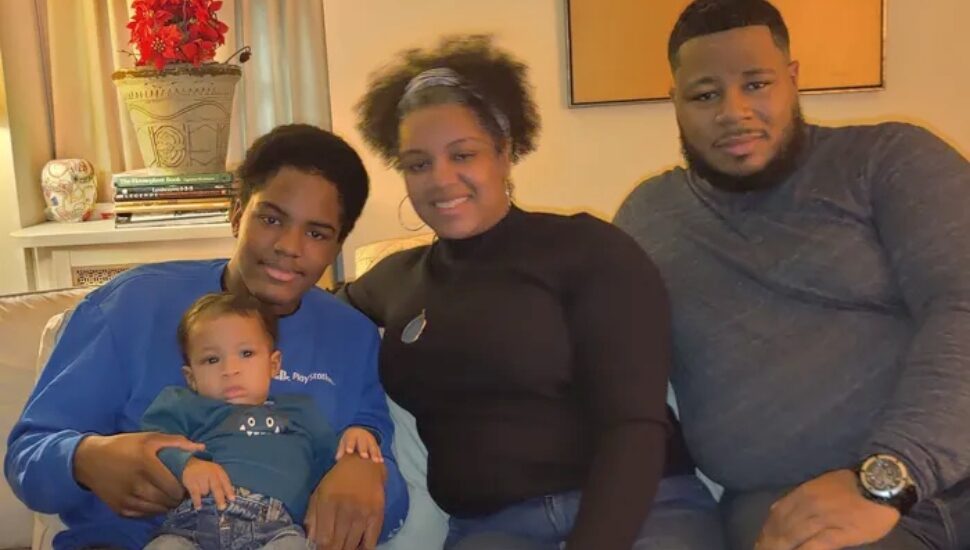 Garry Jones and TajMarie Thornton of Bala Cynwyd first met when they were classmates at Community College of Philadelphia in a business class where all they exchanged were a quick “hi” or “bye,” writes Anndee Hochman for The Philadelphia Inquirer.

“Taj was my first Facebook friend,” Garry said. “I thought she was cute. But I didn’t do anything.”

That’s how things stayed for 13 years. Life went on for both of them. TajMarie had a baby – her son Nazir was born at 26 weeks and spent over 2 months in the NICU. Sometime later her relationship with the baby’s father ended. She started working as an interior decorator.

As for Garry, he earned a degree from La Salle and went into finance. He got married and then three years later divorced.

Then two years ago, TajMarie’s photo popped up on Garry’s Facebook feed. “I thought: Oh, she still looks the same. And she’s single,” he said.

Garry reached out and TajMarie responded. Since it was spring 2020 and the pandemic was just in its early days, options for dates were limited, but the two got creative and started going on dates. They went on walks, ordered take-out, and had picnics. Soon enough they were meeting each other’s families and talking about the possibility of having more children.

“I thought: I need to see where his head is at,” TajMarie said. “Was he looking for a flock of children? A couple of children?”

Garry replied: One for sure. Two, max.

A few months later, TajMarie found out she was pregnant, and shared the news with Garry and her son Nazir, who both experienced a flurry of emotions but ultimately were excited. The second pregnancy felt familiar but also completely new to TajMarie.

When it came time for TajMarie to give birth, she was rushed to the operating room for a C-section as the doctors feared she would have a uterine rupture.

“When I woke up, Garry was with me, but the baby was in the NICU,” TajMarie said.

Baby Boy Luke spent two weeks in the NICU until his lungs were fully developed. When the family was finally able to bring him home, it was both an extraordinary and ordinary day buckling Luke into his car seat and giving him a tour of Philadelphia.

“It was one of the happiest days of our lives,” Garry recalled. “But it was also so normal. OK: You just came home.”

Ask a Real Lawyer: How to Account for a $50,000 Undisbursed Inheritance