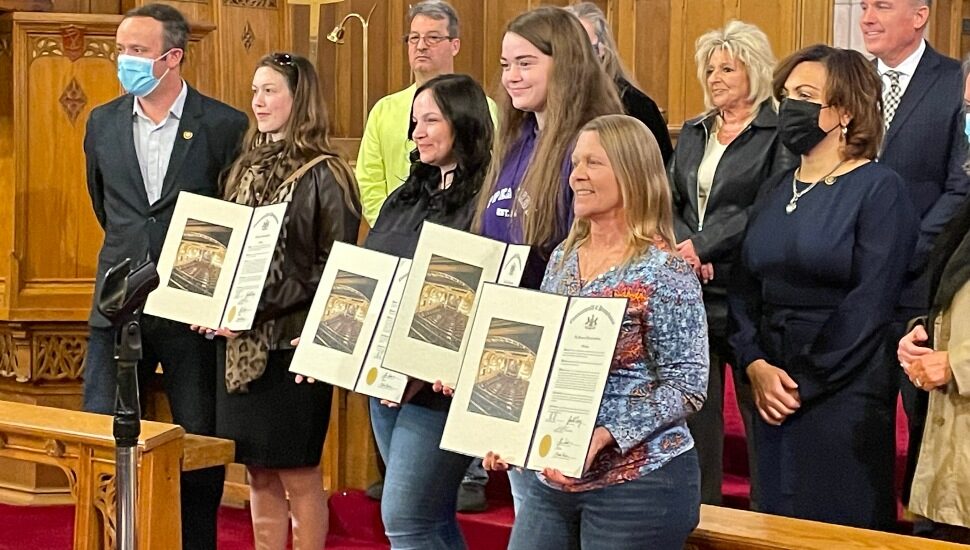 So many things went right on Jan. 11.

People did their jobs. They paid attention, ignored the danger, stepped up to help.

So many things went right on Jan. 11 that they’re calling it the miracle of Burmont Road– a damaged medical helicopter transporting an infant girl to Children’s Hospital that crash-landed near the front steps of a Drexel Hill church.

And everyone survived—the infant girl, the nurse, the on-board medic—and pilot Daniel Moore.

On Thursday afternoon, four women who played a role in helping the victims of the crash were honored by state representatives and Upper Darby Township officials.

The recipients received Citations of Recognition from the Pennsylvania House of Representatives at a presentation inside the church, then stood on the now-empty crash site outside to be honored separately by Upper Darby Township.

Lyft driver Kathryn Donofrio, her passenger, Upper Darby High School Senior Emma Gray; Tina Hamilton, and Jewel Singles had no idea when the day started that by early afternoon they would be running toward a crashed helicopter that appeared to be on fire, leaking fuel.

DHUMC’s Pastor, Russell Atkinson, described the miracle of people in the community that day, from police, EMTs, and other first responders, to the “ordinary” four women who stopped to help.

“When the helicopter crashed, people in the immediate vicinity who had no special training, who had no special responsibility by virtue of their job, they responded,” Pastor Atkinson said. “Today is a celebration of those people.”

“Their heroic instincts, along with those of the pilot, crew, and our first responders assured that no lives were lost that day and that the accident scene was made secure,” Keffer said.

State Rep. Mike Zabel, reflecting on the honorees, said, “They are my neighbors. They are your neighbors and they are our heroes.”

State Rep. Gina Curry referred to the honorees as “sheroes” and noted how appropriate it was that they were being recognized during Women’s History Month.

“You’re a young woman, You could have said let me get out and off of the scene. Or you could have just taken your camera out and started taking pictures and posting it,” she pointed out.

Emma Gray deflected the label of hero, saying the real heroes that day were the first responders.

Emma was in the car with Kathryn when they saw glass and flaming debris on Burmont Road. The helicopter was to their left. Part of it was on fire.

“It looked like it was going to explode,” she said. Several of them yelled for the passengers to get out.

The medic inside the helicopter called for help and said the pilot was trapped underneath. Emma, Tina, and Jewel ran over and pulled the pilot out from underneath while the medic handed Kathryn the baby.

Emma and the medic knelt down beside Mr. Moore.

“We just kind of looked each other in the eye and there was a genuine understanding we’re both scared but we’re doing everything we can at the moment. That’s when I looked down and saw and said, ‘hey, helps on the way. I called 911. You’re going to be OK.’ And I’m glad he ended up OK.”

Emma advised people to call 911, even if it seems like someone else already called.

“Help when you can. You never know what you’re going to be able to do. Even if you’re scared.”

Kathryn Donofrio was surprised by what the medic handed to her.

“I did not think it was going to be a baby but it was,” she said.

She held the infant until the medic was safely out of the helicopter and handed her back to him. The infant was later transported by ambulance to Children’s Hospital.

“Every human is important so if there’s ever a time when you can help someone out I would always do that,” Donofrio said.

Tina Hamilton was riding down the road when suddenly there was a helicopter over her head. She described it as “mind-blowing.”

Hamilton stopped and called 911 right away. She took blankets out of her car for the baby and stayed on the line so dispatchers would have immediate crash site information.

At one point, the helicopter medic used her phone to dispatch an ambulance for the baby.

Jewel Singles, an EMT with the Collingdale Fire Company, was on her way to the cleaners when the copter came down.

Primarily she kept the crowds away from the wreckage.

“I don’t know much about airplanes and helicopters but there was fuel everywhere and it was smoking so you put the two together you know enough to get away from it,” she said.

Here’s a video of the citation presentation to the four women who helped at the crash site.

Drexel Hill’s Helicopter ‘Miracle’ Caught the Attention of the World