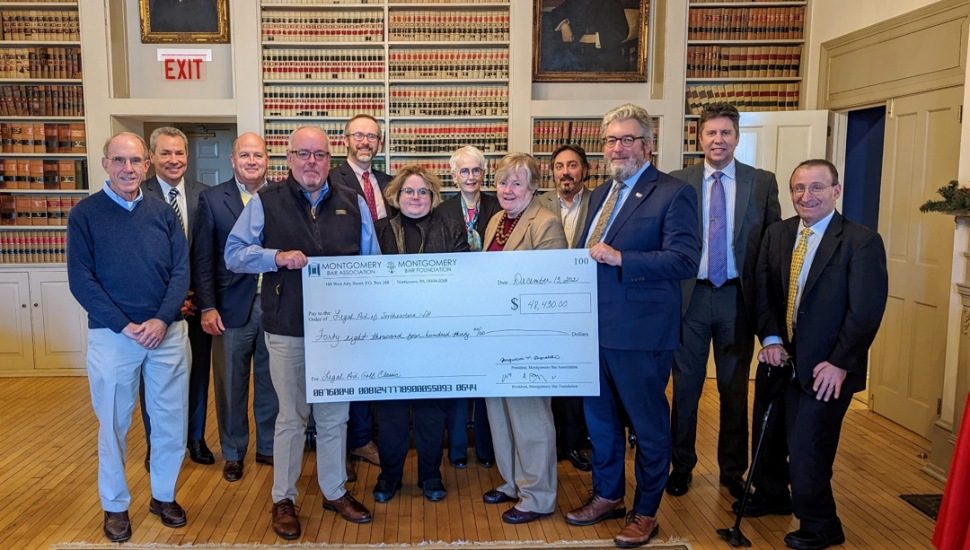 On Monday, December 13th, Officers and Trustees of the Montgomery Bar Foundation (MBF) presented checks to a number of local justice-related organizations during the MBF’s December Board of Trustee Meeting and Holiday Luncheon at the Montgomery Bar Building.

As the charitable affiliate of the Montgomery Bar Association, the MBF has supported law-related educational, charitable, and humanitarian projects throughout Montgomery County.

Since 1987, Grants awarded by the Foundation have been used to help the elderly, homeless, victims of domestic violence, troubled and underprivileged youth, and many other individuals and families in need.

A ceremonial check was presented in the amount of $48,430.00 for funds raised from the Bar Foundation’s annual Legal Aid Golf Classic, which took place in the fall this year as a result of the Pandemic.

As always, this year’s contribution to Legal Aid of Southeastern PA included matching funds on net proceeds, provided by the Montgomery Bar Association with the help of its supporting event participants and sponsors.

To find out more about the Montgomery Bar Association click here.

Wyndmoor Native and Host of ‘Mad Money’ Returns to Pennsylvania