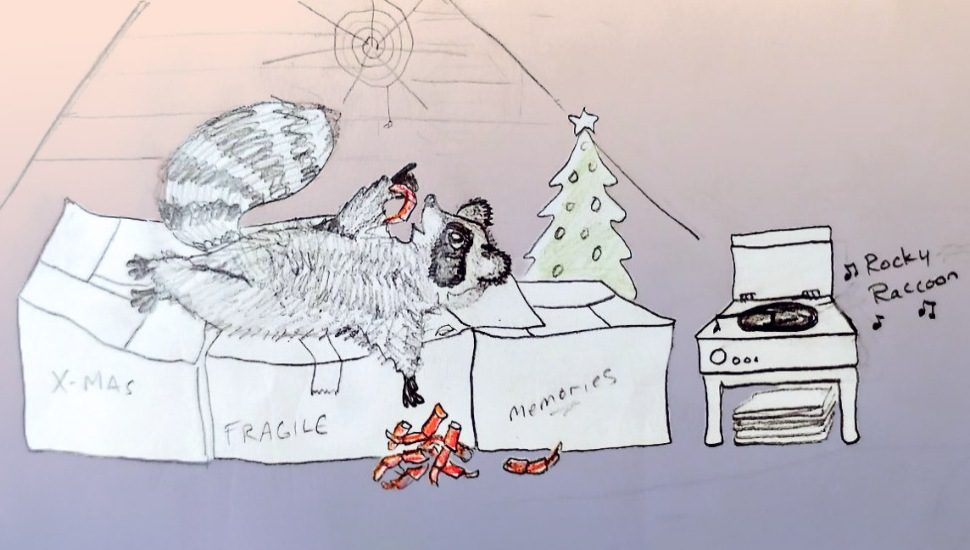 Image of crab legs-eating raccoon, as illustrated by Kayli Rife, Billy Penn.
This raccoon has got the life!

A family that moved from South Philadelphia to Montgomery County a year ago recently discovered they have had a guest living in their attic – a crab legs-eating raccoon, writes Drew Olanoff for the Billy Penn.

Since the home they bought near Valley Forge is more than a century old, the family has been doing upgrades since moving in.

Then last week, an electrician was working in the attic when he came downstairs with an interesting tidbit of info.

“You have a raccoon in your attic,” he said. “And well. He’s um, eating king crab legs. He hissed at me. He’s built quite a nest up there.”

The thing that amused and intrigued everybody the most – including the people on Twitter – were the crab legs, and how the raccoon was obtaining them.

However, once they found a person who would come to remove the animal – humanely – the mystery was solved.

The guest was a possum and not a raccoon.

And the thing it was eating was a fuzzy item that still remains unidentified, but was definitely not crab legs.

Read more about the family’s houseguest in the Billy Penn.