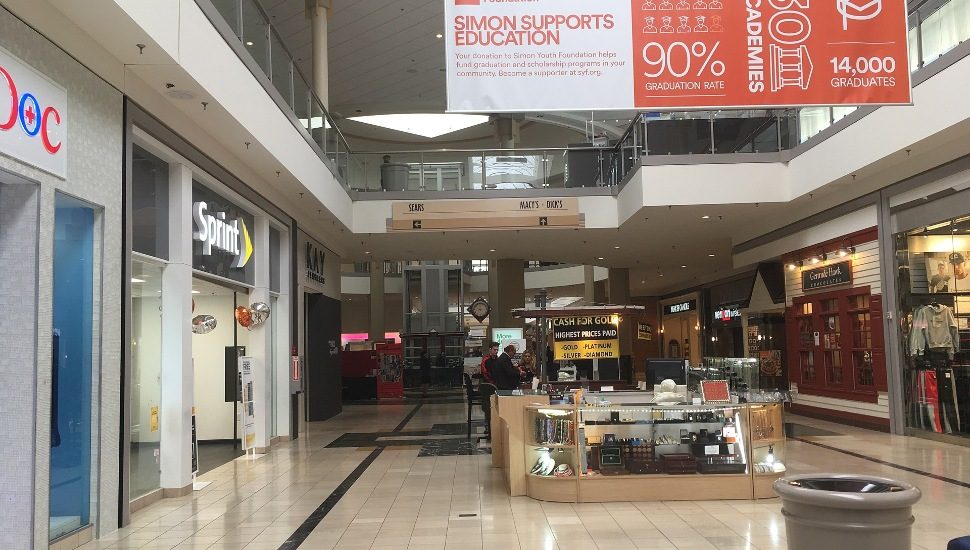 Image via Dough4872, Wikipedia.
First floor by Sears in a quiet mall.

In another sign of the financial woes plaguing shopping malls, the Montgomery Mall was foreclosed on earlier this month. The owners were Simon Property Group, the biggest mall owner in the country, evidencing how none are impervious to such troubles.

The news officially came on July 12, when a judge made a decision for $118.78 million against Simon, reports Natalie Kostelni for the Philadelphia Business Journal.

Simon still has many other major properties to its name, such as the King of Prussia Mall, so it is not totally clear what about the Montgomery Mall specifically made it no longer a priority for them.

For their part, Simon is currently remaining quiet about the decision.

Though some analysts are speculating the troubles likely date back to when a $100 million loan was taken for the mall in 2014 from the Royal Bank of Scotland.

Right around that same time Simon also invested $8 million in renovations to the Montgomery Mall, including adding a Wegmans and updating the outside of the property.

However, when all of these big financial moves were being made, obviously nobody could predict that enormous financial hit that awaited just six years down the road in the form of COVID.

And in June of 2020, Simon began missing the payments on the loans.

Until more information comes out, it is not certain whether Simon strategically decided to move on from the property or if they were incapable of continuing with it.

Though it is worth noting that when the Montgomery Mall was appraised in 2014, it was worth $195 million. When it was appraised again in 2020, its value had dropped to less than half at just $61 million.

To learn more about what the future may hold for the Montgomery Mall, read more here.

Analysts Say Data Suggests That Malls Like King of Prussia Are Changing, Not Dying