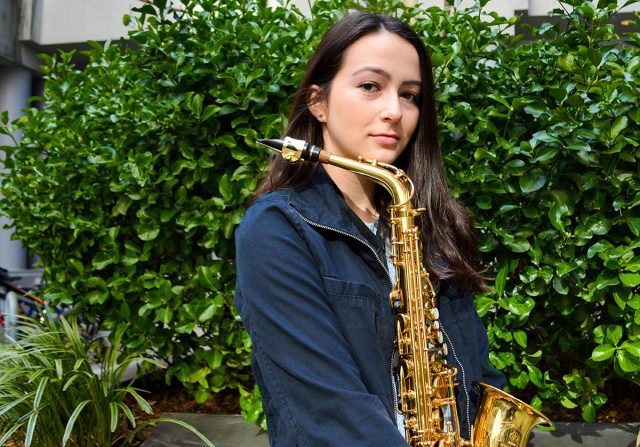 Olivia Hughart, a Lower Merion native saxophonist-composer and founder of female-focused Key of She Jazz organization and conference, is working on her first album. Image via Manasa Gudavalli / WRTI.

At nineteen years old, Olivia Hughart, a Lower Merion native saxophonist-composer, is already renowned in the world of jazz for starting the female-focused Key of She Jazz organization and conference, writes A.D. Amorosi for the WRTI.

Hughart developed her love for jazz from an early age thanks to her parents.

“Ever since we were little kids, my parents would wake us every morning, loudly playing jazz through the house,” she recalled.

Then seven years ago, when starting with a jazz big band, Hughart realized she was one of few girls there. This prompted her to organize the girls in the school district as a community. The group soon grew to include girls from a much wider area and morphed into a 200-attendee conference two years ago that supported jazz and broke gender barriers.

Now, the young musician is writing compositions for her first album and is planning to form a big band in the future.

“I hope to include some up-and-coming ladies on that record, too,” said Hughart.

Read more about Olivia Hughart at the WRTI by clicking here.

Despite Pandemic, North Penn High School Marching Band Will Have a Season