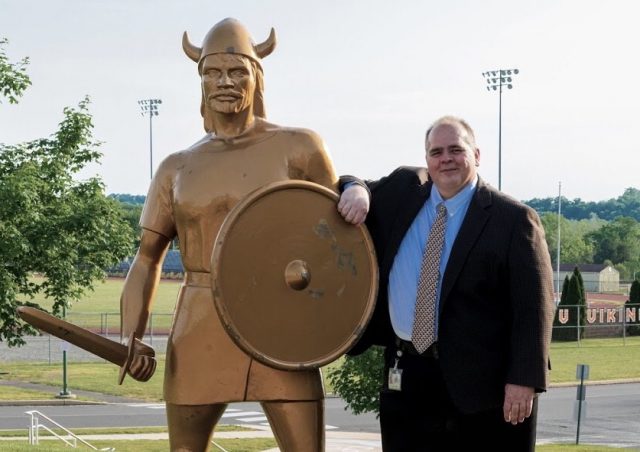 After more than three decades in the Perkiomen Valley School District, the last 16 of that serving as high-school athletic director, Larry Glanski is ready to retire. Image via PA Prep Live.

After more than three decades working in the Perkiomen Valley School District, the last 16 serving as high-school athletic director, Larry Glanski is ready to retire, writes Jeff Stover for the PA Prep Live.

Glanski’s departure, which he announced in August, will become effective on October 30.

For Glanski, the last 34 years offered both challenges and fulfillment within the growing school district. They have been a “great ride.”

“I was fortunate to be able to do it,” he said.

Glanski was also very involved in sports when he attended Owen J. Roberts High School and played football at Kutztown University. He then got a coaching position at Perkiomen Valley after graduating.

“I’m appreciative PV gave me the opportunity,” he said. “I set out to be an elementary school teacher.”

During his time at PV his experiences included serving as the head of a classroom as well as overseeing the high school’s athletic programs and facilities. He was also a member of the football, track and field, and wrestling coaching staff.

Read more about Larry Glanski at the PA Prep Live by clicking here.

Despite being Ready for Pro Sports to Return, Norristown Doctor Thinks It Is Still Too Early

Despite Pandemic, North Penn High School Marching Band Will Have a Season

Golf Digest: Merion Golf Club’s Joanna Coe Is One of the Best Young Teachers in the U.S.

This North Wales Eagles Fan Has a Team Talisman, and He's Not Afraid to Call on Its Power