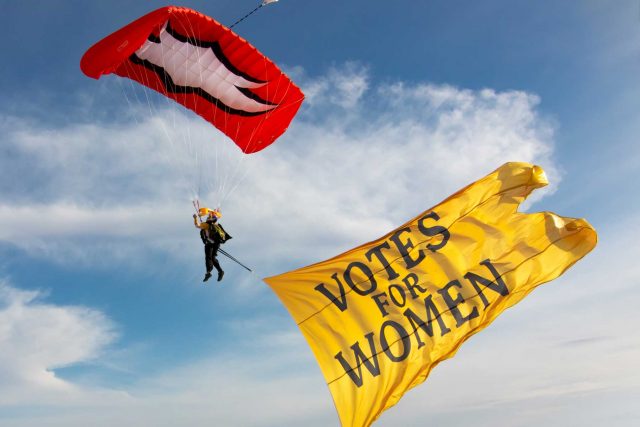 One hundred years ago, women were finally granted the constitutional right to vote with the passage of the 19th Amendment. The Justice Bell, which is the official symbol for women’s suffrage, began touring the country in 1915 with the clapper chained to the side symbolizing that women had no voice.

The Bell ended its tour in 1920, when it finally rang and women had won their right to vote.

To celebrate the centennial, the Justice Bell was transported from its home at the Washington Memorial Chapel in Valley Forge to Independence Hall in Philadelphia on Aug. 25.

As part of previous jumps in different parts of the country commemorating the 100th anniversary of Women’s Suffrage, the Highlight Pro Skydiving Team ladies carried flags with the same messages as the suffragettes’ protest flags.

As they reached the ground, the team delivered a special bottle of champagne to christen the Justice Bell’s journey to Independence Hall.