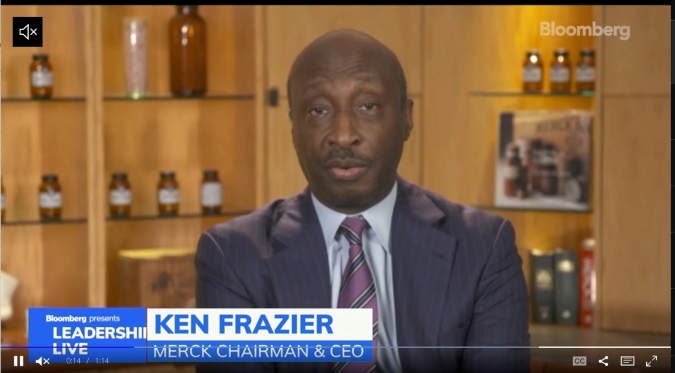 Frazier, CEO of Merck, the pharmaceutical giant with significant operations in West Point near Lansdale, talks how being sent to a better school changed his life. Image via Bloomberg.

Being sent to a different school out of his Philadelphia inner city neighborhood helped change the life of Kenneth Frazier, CEO of Merck, the pharmaceutical giant with significant operations in Montgomery County, writes David Rubenstein for Bloomberg.

Frazier grew up in what was then “known as the ghetto.” His father had a third-grade education and he worked as a janitor.

“But he had very high standards,” said Frazier, as did his mother.

The stroke of luck in young Frazier’s life came from the social engineers in Philadelphia who were in the process of implementing the school desegregation.

As part of the project, Frazier and his younger sister were put on the bus and sent to schools outside of their neighborhood.

“We were sent to, frankly, good schools,” said Frazier, “rigorous schools, and we were given a better education than the people in my neighborhood.”

The move closed what Frazier refers to as the “opportunity gap” that numerous African American people in the country still face each day and started him on a path to success.

Watch the entire segment at Bloomberg by clicking here.