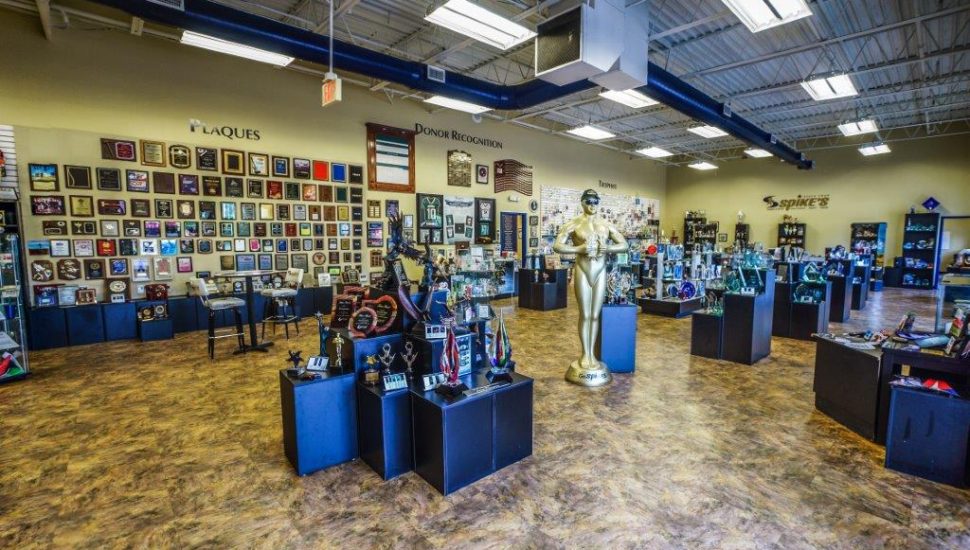 Spike’s Trophies, a top manufacturer of trophies, medals and awards with locations in Bryn Mawr and Philadelphia, should be enjoying its busiest time of year. Instead, the Covid-19 shutdowns forced co-owner Keith Baldwin to let go of all 45 employees in March.

“I had never laid anyone off before,” he says, choking back tears. “But when the governor closed the state, we became non-essential and had to close. I cried in the shower that morning.”

But Baldwin was ready to fight for his staff and the company he has been a part of since 1978.

Even though Spike’s biggest events, including school graduations, the Penn Relays, the Dad Vail Regatta and the Broad Street Run, were canceled, Baldwin hustled to adapt, adjust and innovate.

He got on the phone and worked his contacts in the small business community and at Philadelphia’s Chamber of Commerce—and struck gold when his bank put him in touch with AnswerNet, a company that provides call center services.

They had a contract with the New York Department of Labor, which needed people to make calls scheduling Covid-19 tests for people in the five boroughs of New York City.

Almost immediately, Baldwin was able to rehire all of his employees, who quickly found themselves doing more than just test scheduling.

“So many of those calls were inspirational,” Baldwin says of the folks they contacted who were experiencing Covid-like symptoms. “People were so grateful, and we found ourselves giving them hope.”

There were also some very painful conversations. “One call shook up the entire staff. We were calling for the father, and his son answered,” Baldwin says. “He told us his dad had died the day before.”

After completing the emotional testing contract, Baldwin pivoted yet again. In May, his employees began making calls for the New York Department of Labor, fielding questions about unemployment benefits.

Spike’s is also preparing to manufacture personalized masks and have pre-sold 2,000, mostly to area schools. And next on his list: Hand sanitizer. “We sourced the bottles and the liquid,” says Baldwin. “And we’ll [soon] have the machinery to do the whole process.”

Not content to help only his own business, Baldwin is also assisting other non-essential companies in adapting to the current situation.

Using Baldwin’s connections, a Philadelphia caterer now provides a full week’s worth of meals for healthcare workers in the city.

“[The crisis] is cutting very deep and very wide,” he says. “And not only does this affect the vulnerability of people physically, but also mentally. I find half my day is spent trying to give people hope.”

With a boss like Baldwin, Spike’s is sure to come back stronger than ever as the shutdowns end and people begin to emerge from quarantine. And his employees will know he has their backs 100%, even when the country’s entire economy comes to a near standstill.

Find out more about Spike’s Trophies.

Jennifer Leonard is a writer at VISTA Today, specializing in retail and consumer marketing. A Chester County resident, Jennifer has 20 years of experience as a full-time editor and writer for magazines including Woman’s World, Cosmopolitan and Seventeen. Jennifer is available at jleonard@vista.today.

Bryn Mawr Resident, CEO of Conshohocken-based Kynetic Launches ‘All in Challenge’ to Feed Those In Need During COVID-19 Crisis

Malvern Bank House of the Week: A Bryn Mawr Beauty with a Resort-Like Feel