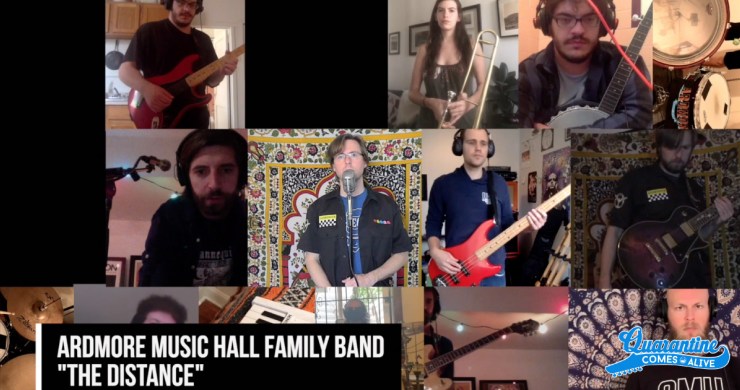 Before playing a symbolic cover of Cake‘s “The Distance,” the Ardmore Music Hall Family Band called for independent venue support at Quarantine Comes Alive. Image via Live for Live Music.

The Montgomery County band closed out the primetime, 7 p.m. block of the global virtual music festival that took place on May 30.

The goal was to raise money for various charities through the comprehensive PLUS1 COVID-19 Relief Fund. Over 70 artists took part in the 15-hour livestream marathon.

The Ardmore Music Hall Family Band did a quarantine-style video that showed more than a dozen AMH staff members as they sang and played a variety of instruments, including a guitar, banjo, horns, and percussion.

“Team Ardmore was super proud to team with L4LM in representing the cause for the National Independent Venue Association, fighting for small independent clubs like ours to get the legislation passed and support needed to survive and to support our staff for the long haul,” said AMH talent buyer Chris Perella.

Read more about the Ardmore Music Hall Family Band at the Live for Live Music by clicking here.