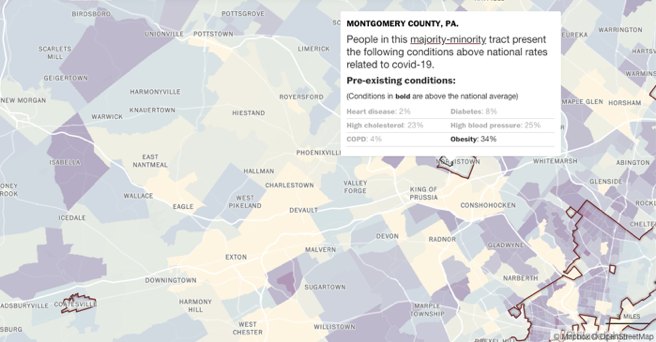 Posted By: Ken KnickerbockerPosted date: May 27, 2020In: Archive, Healthcare, Norristown

Communities of color in Montgomery County and across the United States are at higher risk of being affected by coronavirus deaths. This is due in part to a higher level of chronic health conditions and greater social vulnerability, which includes living conditions and access to health care, write Aaron Williams and Adrian Blanco for The Washington Post.

To determine which communities could be more at risk from the deadly virus, The Washington Post used data provided by PolicyMap to analyze chronic health and social vulnerability estimates.

In Montgomery County, Norristown, which has a minority population greater than 50 percent, is one of the highly vulnerable areas. This area has obesity rates that are above the national average, overcrowded households, and a high percentage of the uninsured population.

Meanwhile, majority-white Phoenixville has a high percentage of the uninsured population as well as overcrowded housing. However, with all chronic conditions at or below the national average, it is not considered a highly vulnerable area.

Ambler has a high percentage of the uninsured population and high obesity rates but is also not considered a highly vulnerable area.

Read more about the report’s findings at The Washington Post by clicking here.