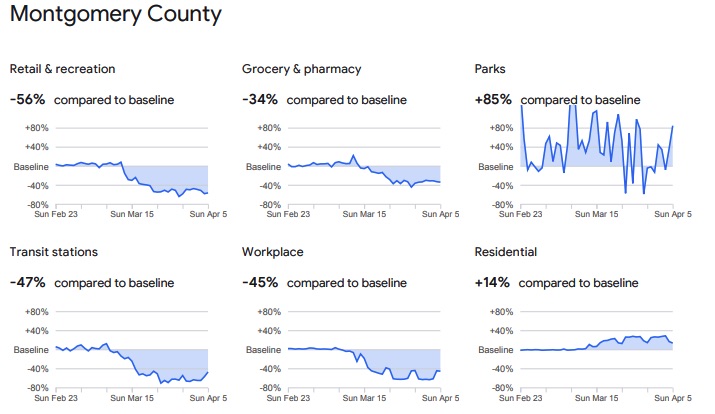 According to Google tracking, residents of Montgomery County are doing a better job of staying at home than most of Pennsylvania.

According to Google tracking, residents of Montgomery, Chester, and Delaware counties are doing a better job of staying at home during the pandemic than most of Pennsylvania, writes Evan Brandt for The Pottstown Mercury.

For this, Google analyzed data tracking the location of people’s cell phones over the last several weeks.

According to the most recent numbers, updated April 6, the number of Montgomery County residents leaving home to shop for items other than groceries or medicine has dropped 58 percent from the February 23 baseline.

That is 8 percent more than the state average.

Meanwhile, in Chester County that number dropped by 54 percent and in Delaware County by 50 percent.

Chester County saw a drop in trips to grocery stores and pharmacies of 38 percent, with Montgomery and Delaware counties also recording significant drops of 36 percent and 28 percent respectively.

Montgomery County had the largest percentage of residents spending more time at home at 15 percent as well as avoiding the workplace at 44 percent.

Read more about the drop in mobility at The Pottstown Mercury by clicking here.