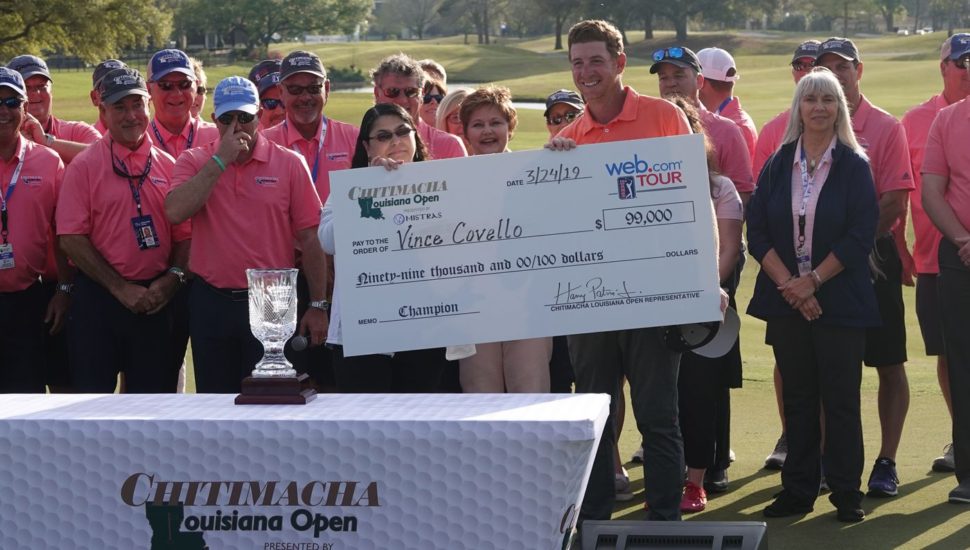 Vince Covello is shown with the first-prize check for $99,000 he won in the Chitimacha Louisiana Open on the Web.com Tour. Image via web.com tour.

A lifetime of waiting and now Havertown native and professional golfer Vince Covello won’t be competing in the PGA Tour this year, writes Joe Juliano for The Philadelphia Inquirer.

It wasn’t the coronavirus and suspension of the Tour schedule, but rather a nagging back injury.

Covello had to stop playing after nine events of his PGA Tour rookie season.

He made the cut in his rookie debut, tying for 47th, than missed the cut in his next eight events. He took a medical extension while he rehabs the injury.

“On the PGA Tour, it still wasn’t right, and I think it was the best time to try and get myself right because I worked very hard to get this opportunity and I wanted to make sure I give myself the best chance to succeed,” he said.

Covello, 37, was born in Springfield. He lived in Havertown and attended Episcopal Academy before his family moved to Florida when he was 17. He played junior golf at Llanerch Country Club.

Trauma and the Brain: Signs You Might Be Living in ‘Survival Mode’