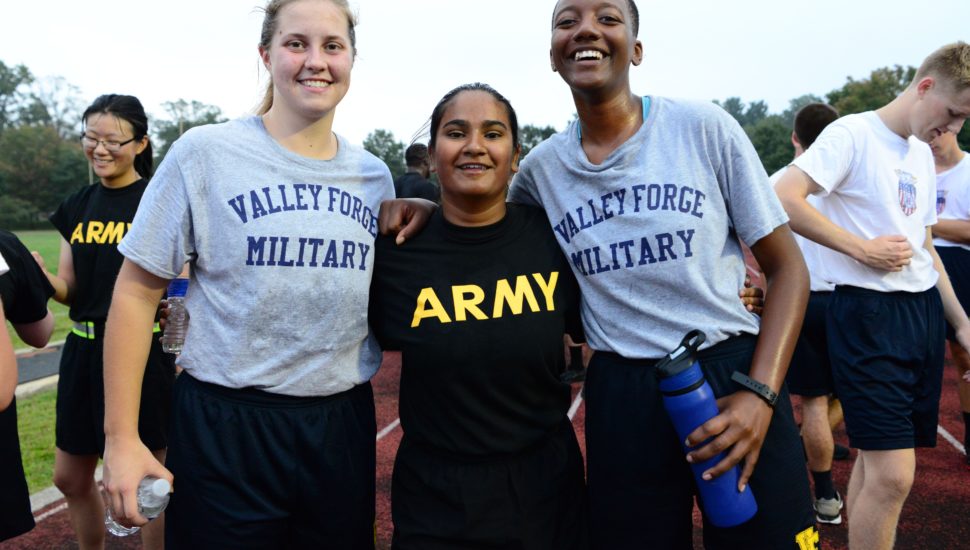 Now more than ever, our country needs young men and women of character.

At this moment, Valley Forge Military Academy and College (VFMAC) is forging its young cadets into the next generation of leaders. On a beautiful, 100-acre campus in Wayne, VFMAC is teaching young men and women a set of customs and traditions that will serve as the foundation of their future success.

VFMAC is a leadership institution focused on developing the whole person. It’s comprised of a middle school and college preparatory high school for boys (the Academy), who have the option to live in the barracks or commute from home, and a co-ed, two-year college (the College). Its structured, supervised, and cadet-led community helps to inculcate a deep, enduring commitment to responsible and informed citizenship.

Since its founding in 1928, VFMAC has used the Five Cornerstones – Academic Excellence, Character Development, Personal Motivation, Physical Development, and Leadership – as its approach to developing its cadets. It’s a model that Dr. Paul Lea, the Dean of the Academy, is familiar with on several levels.

Lea, a native of Chicago, graduated from the Academy in 1987 and the College in 1989, before going on to earn nearly a handful of college degrees.

“When I was a teenager, gangs were starting to take over our local public school where I grew up,” said Lea. “I was an Eagle Scout, and one day, I remember reading a copy of Boys’ Life (the monthly magazine of the Boy Scouts of America), and there was an ad for Valley Forge in there. My father was looking over my shoulder and suggested that I consider it. That summer, I attended a band camp there, fell in love with the environment, earned a band scholarship, and the rest is history.”

As a graduate, Lea has unique insight and perspective into what makes Valley Forge great – and what separates it from the pack of private schools around the Main Line.

“Valley Forge has a tendency to cram multiple years of a life into a single year,” he said. “Our cadets grow up fast and learn a different level of responsibility than they could at any other school.”

The cadets come from a variety of different backgrounds. Some are the highest of achievers; others are in need of more support.

“At Valley Forge, the cadets aren’t just one of a number,” said Lea. “We make it a point to keep the classrooms small. We’re giving them the tools to succeed, showing them how to trouble-shoot their issues, how to problem-solve.”

Garrison Sergeant Major Bill Mott, who enjoyed an extraordinary, 37-year career with the British Army, speaks highly of the type of education, both in and out of the classroom, that cadets receive at VFMAC. Mott arrived in Wayne last summer from his farm in Kentucky, where he was enjoying retirement with his American wife.

His distinguished career, which included personal service to the monarch, garnered him the OBE (Officer of the Most Excellent Order of the British Empire) and MVO (Member of the Royal Victorian Order) distinctions. He choreographed the military side of Britain’s historic events, including Trooping the Colour, State Opening of Parliament, Festival of Remembrance, the wedding of Prince William and Catherine Middleton, and the funerals of Queen Elizabeth and Margaret Thatcher.

Now, GSM Mott wears many hats at VFMAC, referring to himself as “a helper, a supporter, and an influencer.”

“Our military model enables these lads to experience a lot more activities to help them grow and mature in different ways,” he said. “After they’ve had that year or two under their belts, they have such a great balance, such great control of themselves. They develop an understanding of what it takes to be successful. It’s an absolutely wonderful sight to see when they graduate. Whatever path they choose – and it doesn’t have to be the Armed Forces; the majority of them go into civilian sectors – they are head and shoulders above their peers. That’s because of what they’ve experienced at Valley Forge.”

Valley Forge Military Academy and College invites you to attend its upcoming Open Houses on Saturday, Dec. 7 and Saturday, Jan. 18 at 9 AM. You can also click here to learn more about VFMAC.