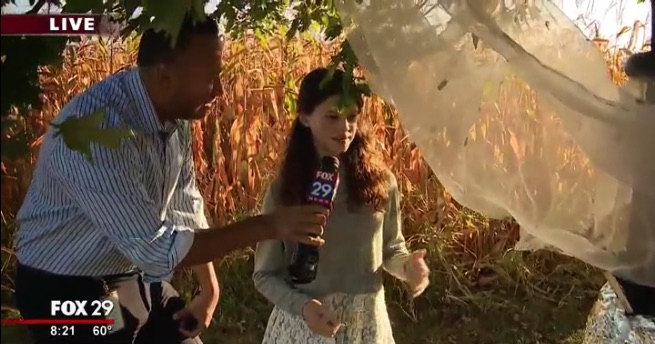 Fourteen-year-old Rachel Bergey from Harleysville has received several awards for her spotted lanternfly trap made from tin foil and plastic. Image via Fox29

Fourteen-year-old Rachel Bergey from Harleysville has received several awards, and now a patent, for her innovative spotted lanternfly trap made from foil and plastic, writes Thomas Drayton for Fox29.

Bergey, who has been homeschooled since the fourth grade, started to notice how much trouble the presence of spotted lanternflies was causing over a year ago.

“Our trees were infested and so we wanted to try and find a way to get rid of the spotted lanternflies and save our trees,” said Bergey.

Her attempt to use yellow tape was less than successful so she went back to brainstorming. Then she came up with the idea of creating a tunnel inside a tinfoil barrier that would guide the insects into a net.

Once everything was up and running, she observed that the insects have such strong climbing instinct that they were not motivated to leave the plastic trap.

Through the experiment that lasted for two weeks, she caught more than 600 insects. She also noticed they died within 24 hours and could then be easily disposed of.

In addition to the many awards and a place in the Broadcom MASTERS Competition, her project has earned Bergey a patent.

Read more about Rachel Bergey at Fox29 by clicking here.