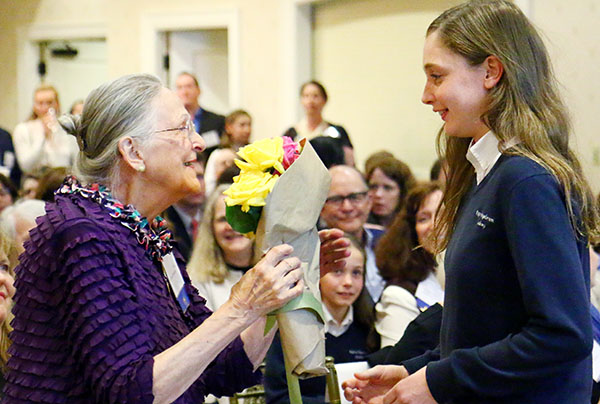 Barbara Henkels's impact on Catholic education in the Philadelphia region is immeasurable.

Pope Francis has appointed Barbara Henkels, a longtime resident of Plymouth Meeting and the founder of the Regina Academies, to the Pontifical Equestrian Order of St. Sylvester in recognition of her significant contributions to Catholic education in the Philadelphia region.

The Order of St. Sylvester is one of the five orders of knighthood in the Roman Catholic Church that are awarded directly by the Pope. It is intended to honor Catholic lay persons, who are actively involved in the life of the Church, for their extraordinary contributions and exercise of their professional duties.

The Regina Academies is a network of five Catholic, classical liberal arts academies that serve more than 500 students in the Greater Philadelphia area, including in Chester, Delaware, Montgomery, and Bucks counties.

Henkels was recently honored at a special event at the Cathedral Basilica of Saints Peter and Paul in Philadelphia. Along with her late husband, Paul, she founded the Regina Academies – which has schools in Berwyn, Springfield, Ardmore, Abington, and Ottsville – in 2003.

Also, in a separate event, Henkels was honored by the Malvern Retreat House with its St. Joseph the Worker Medal. The medal is awarded to individuals who have made significant achievements while maintaining a strong moral compass reflecting his/her Roman Catholic faith.

Paul and Barbara Henkels’s influence on the Catholic Church in Philadelphia and beyond is immeasurable. They created and served on numerous boards and charities. Perhaps their greatest legacy is the Regina Academies.

Each academy features a unique and rigorous classical curriculum, fully integrated with the teachings of the Roman Catholic faith.