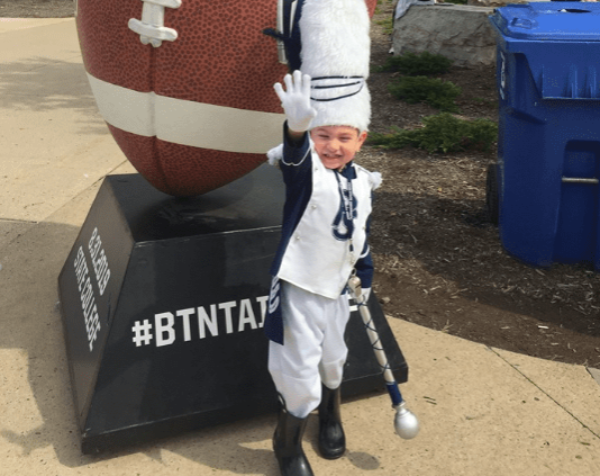 Three-year-old Vincent Ciccarella, from Worcester, dreams, practices, and lives to be the next Penn State Blue Band drum major. (Image courtesy of onwardstate.com).

Most three-year-olds’ daily obsessions include Play-Doh, “Paw Patrol,” and YouTube Kids videos on repeat. However, if you’re a child born into a Penn State family that bleeds Blue & White, you’re raised to go through years of Halloween costumes in the forms of Penn State football players, cheerleaders, and Nittany Lions.

Three-year-old Vincent Ciccarella, from Worcester, however, doesn’t dream about playing for James Franklin or being the next Nittany Lion. Instead, he dreams, practices, and lives to be the next Penn State Blue Band drum major, writes Ryen Gailey for onwardstate.com.

His parents LeeAnn and Joe Ciccarella are both Penn State alumni. They met in 2003 when Joe was LeeAnn’s orientation leader and eventually married in 2007 at Eisenhower Chapel. When Vincent was a baby, they’d put Penn State YouTube videos on for him, beginning his obsession with marching bands before he could even walk or talk.

“He was instantly hooked,” said LeeAnn who had a Blue Band costume made for him as a gift when he was potty-trained. “This has been going on for years. He practices every day. He’s always doing his flips. The first opportunity the gets, he shows people how he can do his flips.”

Last Tuesday, in an attempt to make her son’s dream come true, LeeAnn posted an adorable shot of him in a homemade Blue Band drum major outfit in a Penn State fan page. She had a simple request. She was hoping to find out the band’s schedule for this past Saturday’s game against Idaho, so Vincent could snag a photo with current drum major Jack Frisbie.

“I need your help. This is my son. he is 3, and he is the biggest fan of the Blue Band that you will ever meet,” she wrote in a Facebook post, never predicting her post could go viral.

Sure enough, thanks to Mullen’s help and the generous outpouring from Penn State fans online, Vincent’s dream became a reality. He was able to march with the Blue Band, lead a “We Are” chant, meet Coach Franklin, and also do his very own flip on the field as he took a walk around the stadium before the game.